34 Percent Of Owners Believe They Own a 4G iPhone?

Now one can quite easily get somewhat confused with all the commotion over 4G smartphones, and some get confused at what features a particular smartphone may offer, but according to a recent survey 43 percent of iPhone owners already believe they own a 4G enabled iPhone even though currently Apple doesn’t make a 4G iPhone.

According to an article over on MacRumors, a recent survey by Retrevo has found that some smartphone owners are a tad confused when it comes to 4G with 34 percent of iPhone users thinking their device is a 4G handset.

However those iPhone users are not alone in their misconceptions of their preferred smartphone, as 24 percent of BlackBerry owners also believe they already own a 4G device, and 29 percent of Android owners believe the same, although it is more likely that an Android user would have a 4G enabled smartphone.

According to the survey at least some of those Android users that were polled could be correct in assuming they own a 4G enabled device considering some could have the HTC EVO 4G, or perhaps the Samsung Infuse 4G or other Android 4G smartphone.

The survey also suggests that possibly the ‘4’ in the iPhone 4 has given iPhone 4 owners that false impression that their handset offers 4G and apparently perhaps the same could be said for BlackBerry owners as RIM also doesn’t have a 4G enabled device.

Thus it would seem the term 4G is somewhat confusing for some anyway, but really unless the device has that ‘4G’ label it probably isn’t a 4G device.

When it comes to what playing nice on a 4G network costs, the survey found that 30 percent of those polled believe the data plan costs too much, while 22 percent of responders feel that 4G performance isn’t worth the cost, and 19 percent said they didn’t know enough about 4G to comment.

On the 4G enabled iPhone front, when asked is whether the lack of 4G in the next iPhone would stop people from buying the device, 61 percent of iPhone users said they would purchase or consider purchasing the next iPhone even if it doesn’t have 4G.

When Android users were asked if they would consider purchasing the iPhone with or without 4G only 18 percent said they would whereas 41 percent of BlackBerry owners would consider defecting from their platform to the iOS platform regardless of whether the next iPhone had 4G or not. Thus it would appear that Android owners are somewhat more loyal to their platform than BlackBerry owners. 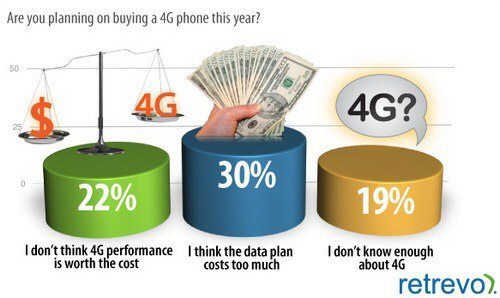