VirusBarrier iOS App: For Detecting And Removal of Malware

With the constant treat of malware hitting smartphones there days its not really surprising that someone has finally developed a mobile app for the detection and removal of malware from a device, and the first app to do so is for the iOS platform, and is called VirusBarrier.even though currently there are no known malware threats with iOS devices.

The VirusBarrier ap for the iPhone, iPod Touch and Apple iPad iss brought to our attention by the guys over at iPhone Download Blog by way of iPhone Italia, and basically the VirusBarrier app is there to check potential files that may infect your iOS device.

The VirusBarrier app cannot scan files automatically or scheduled scans though due to the iOS security design, and is thus an “On-demand” virus detection app that can scan your files as and when you wish.

After that first year’s malware definitions subscription, subscription rates are $1.99 per year, which renews automatically unless the auto-renew feature in the users iTunes account is switched off 24 hours before the current subscription expires, and cancellation of a subscription isn’t allowed during an active subscription period.

So if you fancy having the VirusBarrier app on your iPhone, iPod Touch or Apple iPad as a precautionary measure so you can remain safe from malware in future, the VirusBarrier app is available to download to your iOS device running iOS 4.0 or above from iTunes at a cost of $2.99. 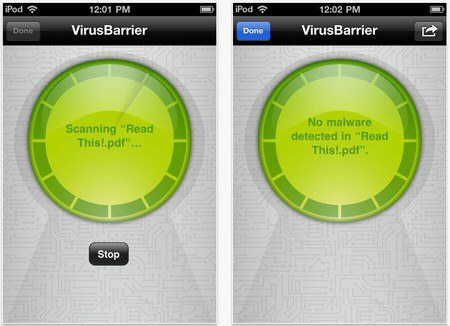