You’d think with the high price of the iPhone and Apple iPad, Apple would be quite happy with the revenue they pull in when you take into account the price of the device and then revenue for the numerous iOS apps the iOS faithful purchase, but it appears that Apple isn’t that satisfied as word is they have just increased the price of iOS apps outside the USA.

According to the guys over at Tap Mag, Apple has raised pricing of iOS apps in the UK App Store some 26 percent, although apparently other countries have seen app prices fall, so perhaps Apple is just targeting the UK as a soft touch?

Apparently the price hike is due not to any developers making modifications but to a pricing tier update from Apple, which basically means that although US app prices remain the same a 59p iOS app will now cost 69p a raise of 16.9 percent.

When an app developer submits an application to the App Store, they don’t have control over the final price the customer will have to pay and are assigned to an app price tier, which gives Apple the final word on pricing for apps.

If UK iPhone and Apple iPad users stick to the lower price tier app then the price hike shouldn’t hit your pocket a great deal, but if you do want one of these rather expensive higher tier app then no doubt you will feel the pinch as a 100 quid hike is bound to hurt.

Having said that, personally I would never fork out Â£699.99 for a mobile app no matter how good it was, and in these harsh economic times these price hikes could make users think twice about purchasing a particular app.

Apple’s pricing doesn’t effect me personally because I am not one of the iOS faithful but rather an Android faithful and have found that Android apps usually come free, just look at Angry Birds for instance, iOS versions cost while Android versions don’t, enough said. 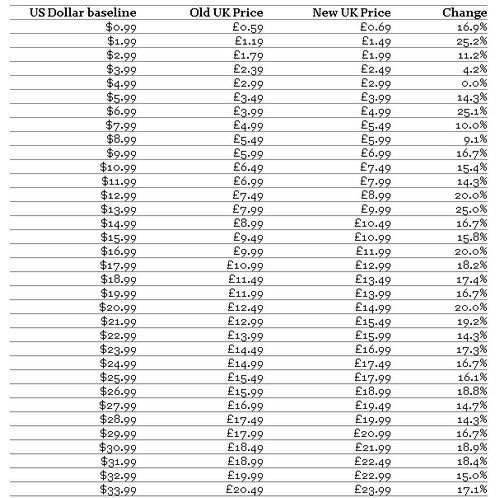