Over in the good ole US of A, Samsung Epic 4G owners have been patiently waiting for the smartphone to be updated to Android 2.3 Gingerbread from Sprint, and previously there have been quiet rumours that Epic 4G owners could see the update in July, and that just might happen.

The reason for the assumption that Samsung Epic 4G owners just might gain the Android Gingerbread update soon is because according to an article over on Sprint Feed, Sprint has now listed that the Samsung Epic 4G ships with Android 2.3 Gingerbread aboard.

Which is a bit of a slap for those that already own the Epic 4G and have been playing along with Android 2.2 Froyo for quite some time, but if new Epic 4G handsets are shipped with Android 2.3 Gingerbread inside, then there shouldn’t be reason not to push out the update to owner’s right?

Having said that, this is of course not confirmation that Sprint will deliver the Android 2.3 Gingerbread update anytime soon, but it should at the lest indicate that the Gingerbread update is close. I check Sprint a few moments ago and the listing is still up and saying the Samsung Epic 4G “ships with Android 2.3,” so it doesn’t appear to have been a mistake on Sprints part.

My personal view on mobile operating system updates is that it seems they always take an eternity to be delivered to users, you ear word possibly months before an update is due and you hang on waiting for what seems like forever only to be disappointed time after time when update release dates fail to materialise.

Of course you may be quite happy to run along on Android 2.2 Froyo, for ages until the update finally arrives. I myself own a Samsung Galaxy S and although Android 2.3 Gingerbread is available for my device I haven’t yet made the jump to Gingerbread. Not because I don’t want it but because of Samsung Kies.

I’m not too sure if Samsung Epic 4G owners get their updates by Samsung Kies or OTA, but I have found Kies to be somewhat of a right pain to update a device and it seems like it takes forever, so I’ve held off grabbing Gingerbread for now.

Anyway, back to the track of this post, its looking like Samsung Epic 4G owners could well see the Gingerbread update hit their device in the not too distant future, or if not you could always hit up a Sprint store and see if they’ll let you swap your device for a new Gingerbread toting Epic 4G, you never know, they just might. 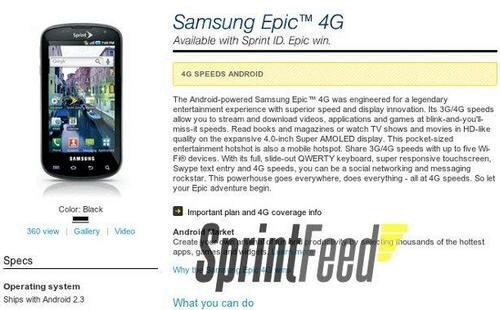