The Sony Ericsson Xperia Ray preview video comes our way courtesy of the guys over at Phone Arena and delivers a nice ten minutes of getting up close with the new Android smartphone that we haven’t heard much about since its unveiling.

The Sony Ericsson Xperia Ray isn’t really a device for those that love large handsets as the Xperia Ray is somewhat on the small side with a 3.3-inch LCD touch screen and is just 9.4mm thick and weighs in at a rather light 100 grams, but the guys so say it is comfortable in the hand especially for single-handed operation.

The 3.3-inch display has a resolution of 480 x 854 pixels, which they say is one of the highest resolutions they have come across on a screen of this size and it has a pixel density of 299ppi, which is a tad short of the ‘Retina’ threshold of 300ppi.

Design wise the Sony Ericsson Xperia Ray features a large semi-circle in the centre housing the home button with a capacitive key on either side, which results in a stylish looking device with a shiny black leathered look back and actually looks far better in reality than in the press shots.

Well to find out if the Xperia Ray is the kind of smartphone that suits your needs head on down and mash that play button…enjoy. 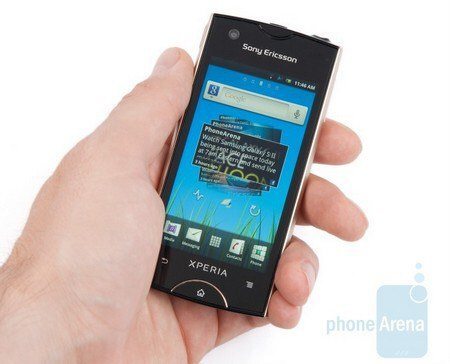