If you are one of the Android faithful looking to make the switch from a contract device to the prepaid arena, and pondering on whether to pick up the Motorola Triumph off contract from Virgin Mobile once the device becomes available, perhaps an unboxing and hands-on video with the smartphone might help you to make up your mind one way or the other.

So, for those that may be considering the switch from contract to prepaid via the Motorola Triumph, that’s just what we have for your viewing consideration below. The Motorola Triumph unboxing and hands on video comes our way courtesy of the guys over at Android Community and delivers four minutes of unboxing the latest smartphone for Virgin Mobile, and an almost two minute hands-on video.

The Motorola Triumph for Virgin Mobile is made of plastic that the guys say is “soft to the touch,” while on the rear sits the Virgin Mobile logo just below the Motorola logo, and is obviously Virgin Mobile’s latest flagship Android smartphone.

As the video isn’t that long I also hit up Phone Dog and pinched their video unboxing of the Mototola Triumph for your viewing consideration as well, so you have two videos to check out from different sources, with the Motorola Triumph unboxing from Phone Dog being doe by Sydney and lasting just over eight minutes.

The Motorola Triumph on Virgin Mobile actually comes with stock Android 2.2 Froyo, which Sydney says many will like, and the device albeit not being a dual core smartphone seems to be quite fast with the transitions not just being very smooth but very detailed, while the display is very bright, and when going into messaging and find a stock Android keyboard along with a Touch Pal and TalkBack keyboard options, something Sydney says she’s never seen before so quickly tries out both.

Anyway, I’ll leave it right there as not to spoil your viewing enjoyment and rather let you head on down to mash those play buttons and check out the unboxing and hands-on footage of the Motorola Triumph, which by the way is destined to hit Virgin Mobile as of the 20th of this month…enjoy. 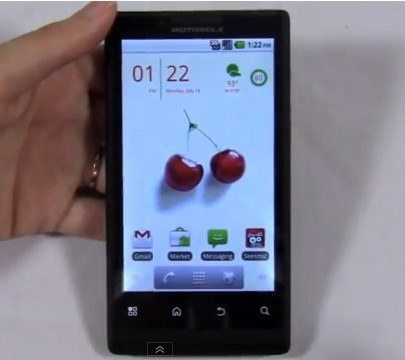