Back To The Future Episode 5 for Apple iPad Hits Tomorrow

For those Apple iPad owners who have been keeping up with the Back to the Future episodes on the iOS platform, you just might like to know that the finale episode of the series, Back to the Future: Episode 5 — OUTATIME will become available from iTunes as of tomorrow the 21st of July.

Apparently this finale episode is the most exciting yet with Marty McFly racing against the clock to repair the timeline, apparently Back to the Future star Michael J. Fox will join the cast in a special guest appearance by playing two characters.

Not being an iOS user I can’t really use these apps myself but I am a fan of the back to the Future films, and apparently these apps stay true to the films characters whereby the user gets to play Marty McFly (Michael J. Fox), Doc Brown (Christopher Lloyd) is there too, as well at Biff Tannen (Thomas F. Wilson) and of course the famous DeLorean time machine itself.

The Back to the Future: Episode 5 — OUTATIME app for the Apple iPad like I stated earlier will be made available tomorrow the 21st of July from iTunes and will command a price tag of Â£4.99, which is somewhere around $8, so is a little more expensive that previous episodes, but then again if you have been playing along you won’t want to miss out on the last one will you.

What we do have for your viewing entertainment below though is a couple of videos from Back to the Future game maker Telltalegames, the first is a previews of all the episodes including Back to the Future: Episode 5 — OUTATIME and lasting two and a half minutes.

The second video is called Back to the Future: Behind The Scenes — Special Surprise Voice Joins The Cast! and as one would expect takes a look at the behind the scenes action to do with the iOS game and lasts just over three minutes, which no doubt you can guess is Michael J. Fox.

Anyway that’s enough from me, I’ll let you head on down to hit those play buttons and check out the footage and don’t forget to check iTunes tomorrow to grab this finale episode…enjoy. 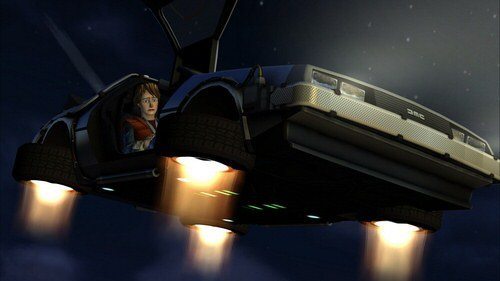