Yes folks, we have the usual confrontation between the top OS platforms for your consideration below, a web browsing battle video between iOS and Android, which pits the iconic iPhone 4 up against not only the HTC Thunderbolt but also the Motorola Droid 3 smartphone to find out which device is best for surfing the net waves with.

The Motorola Droid 3 versus the HTC Thunderbolt versus the Apple iPhone 4 web browsing comparison video comes our way courtesy of the guys over at Phone Arena who pitted the three smartphones against each other in this just over nine minute comparison footage.

In the video the guys run a few different web browsing tests, and to make things a little square and fair, especially as the HTC Thunderbolt would cream the other two when using 4G LTE, they set each device to airplane mode whilst connecting to the same WiFi network.

The guys also disabled plug-ins on both Android handsets and then loaded windows simultaneously on all three smartphones, the result of which was the Droid 3 came out on top loading text and images fastest, followed by the iOS handset with the Thunderbolt bringing up the rear.

However, when plug-ins are enabled on the two Android handsets, things turnabout slightly with the iPhone 4 beating the Android devices due to those taking their time to load Flash content.

The guys finalise by stating that it is somewhat difficult to “characterise” which device is the real winner when it comes to web browsing though, as obviously with 4G LTE being enabled on the HTC Thunderbolt, the device would in the real word win hands down, but if you take into consideration responsiveness then the iPhone 4 would probably be the best choice.

Anyway, I’ll leave it there to let you head on down and hit that play button so you can check out the web browsing comparison footage for yourself and see if you agree with the outcome…enjoy. 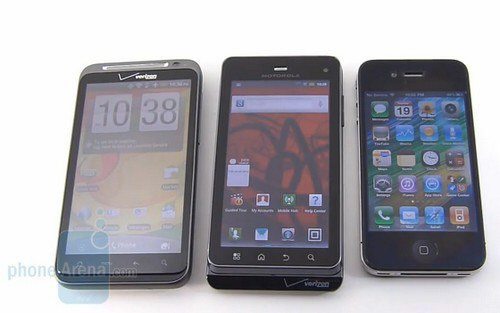