For those that have the Android platform as their preferred smartphone operating system that enjoy texting and calling for free, you just might like to learn that the Viber app for Android has finally been made available on the Android Market following the success of the iPhone version of the application.

The Viber Android app has been in beta since back in May but has now officially launched on the Android Market that offers free calling and free texting to other users who use a Viber app and apparently delivers better call quality than a regular call.

So here’s a few statistics about Viber users, after 7-months Viber can now lay claim to 20 million registered users with 12 million active users in the last 30-days, and apparently Viber users talk 1 billion minutes every quarter and for free.

The CEO of Viber, Talmon Marco says, “We have been looking forward to launching our Android app, especially after having received a staggering number of requests from Android users asking us to bring Viber to the Android market. Our latest user numbers are the best indicator of how much our users love to talk and send messages for free with Viber.”

The Viber app for Android features pop up text message notifications enabling the user to respond without the need to open the Viber app, tighter integration with Android, a full call screen whenever a Viber call is received, and a default dialler that enables the use of the Viber dialler for all calls if you wish.

Apparently the Viber app is free of all ads, doesn’t require any in-app purchases, the ability to talk and text as much as you wish you only require an Internet connection either 3G or WiFi, there are no international charges so you can text or call a friend no matter where they are in the world, and phone number identification meaning you done require a username or password.

We also have for your viewing consideration below a promo video of Viber for Android that last a minute so you can check that out before shooting off to the Android Market to grab the Viber app, which by the way is a free download but is best suited for handsets running Android 2.0 or above. 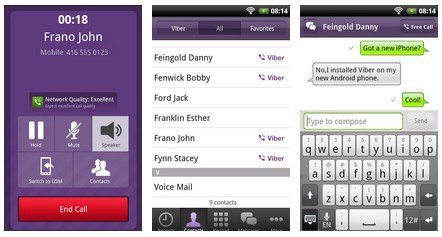