Ah back when there was first word that Sony Ericsson would deliver the first PlayStation certified smartphone, there was a great deal of excitement over the news. For ages the net was alive with posts on anything to do with the first PlayStation phone, and finally the device made its appearance, the Sony Ericsson Xperia Play, but it seems that the Xperia Play hasn’t taken off as expected.

According to an article over on Mobile Tech Review, for those that wish to pick up the Sony Ericsson Xperia Play on the Verizon network, you can now do so for less cash as Verizon has now slashed the asking price of the Android 2.3 Gingerbread handset down to a reasonable $99.99.

The sudden price drop with the Xperia Play comes just four months after coming out to play on the Big Red; with Verizon claiming the price reduction is part of their “Back to School” promotion.

However, sales of the Sony Ericsson Xperia Play haven’t been going too well, probably due to the lack of PlayStations games available for the smartphone, so one has to wonder if as the device has now hit AT&T perhaps Verizon is trying to undercut their rival.

The other thing is of course that dropping the price of the Sony Ericsson Xperia Play to just 100 bucks when signing on for the usual two-year agreement might signal that Verizon is trying to garner interest in the smartphone to up sales prior to perhaps ditching the Android handset, although of course that is pure speculation.

As for being part of that “Back to School” promotion, well it seems to me to be somewhat unproductive as I’m sure we don’t really want our kids spending their time at school playing PlayStation games on their Xperia Play rather than paying attention in class do we.

Anyway for those that might be interested in snapping up the Sony Ericsson Xperia Play for that low $99.99, the device offer the ability to play PlayStation games of course such as Crash Bandicoot, The Sims 3, Tetris, Asphalt 6: Adrenaline, Madden NFL 11, and more.

The Sony Ericsson Xperia Play “Back to School” deal is available as of right now from Verizon online if you wish to snap up the device; any of our readers interested in the Xperia Play at the lower price tag? 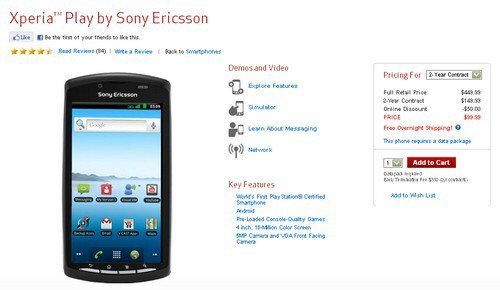 One thought on “Xperia Play Price Slashed By Verizon”