So you are walking along minding your own business when you are set upon by gang members that get hold of your beloved mobile phone and throw it down a drain for apparently no reason, so what do you do? Well this guy decides to dive head first down the drain resulting in him getting stuck.

Seems like a pretty stupid move by the guy to me, I mean if you are going to go head first down a manhole it’s pretty obvious you are gong to experience some difficult extricating yourself along with your mobile phone, and surely there are other ways to get your phone back.

Anyway apparently the guy was trapped for 40 minutes with his legs in the air looking a right prat until the local cops that were alerted to the situation by a neighbour, came along and dragged his butt out, and we have video report of this incident for your viewing consideration below courtesy of Buzz Feed and by way of FunnyLocalNews, which lasts almost three and a half minutes.

You will notice that although apparently the guy claims he was set upon by gang members that chucked his handset down the drain, the report actually says that the man dove into the manhole after “dropping his cell phone.”

Also on watching the footage we see the reporter also trying to find out how the guy fit down the storm drain, and to be honest for a moment there I though she was going to go the same way but fortunately enough she doesn’t.

The 21-year old does appear on camera though to deliver his rendition of just what happened and how he became stuck in the drain, but why didn’t he report the attack to the cops? Well apparently he doesn’t remember having any contact with the police.

There is of course no mention of just what mobile phone the guy wanted back so desperately, so let’s hope it was a high end smartphone otherwise would it have all been worth it really? I’ll leave you to check out the video footage below and to make up your own mind as to whether the guy was attacked or if indeed he dropped the phone and went in after it, and the question, would you do the same…enjoy. 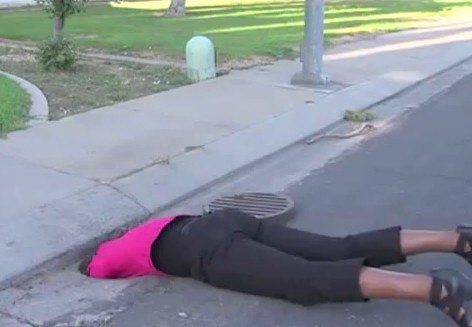