The Samsung Galaxy R preview video comes our way courtesy of the guys over at Phone Arena and they do stipulate that they used a prototype of the Galaxy R for their preview footage so the hardware and software could change.

The video delivers almost ten and a half minutes of getting up close with the new Android smartphone, a device that is a slightly stripped down version of the company’s flagship device the Samsung Galaxy S II, but features a similar design.

As for the design of the Samsung Galaxy R when compared to the Galaxy S II there’s virtually no difference in size except the Galaxy R is a tad thicker but hardly noticeable and weighs in at 4.76 ounces with a removable brushed metal back cover and a solid build feel.

Camera wise the Galaxy R gets a slight downgrade to sport a 5 megapixel auto-focus snapper with LED flash and supports 720p video although apparently the Galaxy R 1GHz Tegra 2 duel core processor could support full HD but again that’s been downgraded, and of course the devices comes with a 1.3 megapixel front facing camera for your video calling.

In finalising, the guys say that the Samsung Galaxy R does have much in common with the Samsung Galaxy S II and offers almost as much as Samsung’s flagship handset by at a cheaper price, although again just how much cheaper that will be isn’t known yet.

So is the Samsung Galaxy R the smartphone for you? Well to find out all about Samsung’s latest Android handset head on down and mash that play button, and feel free to let us know if the Galaxy R captures your attention…enjoy. 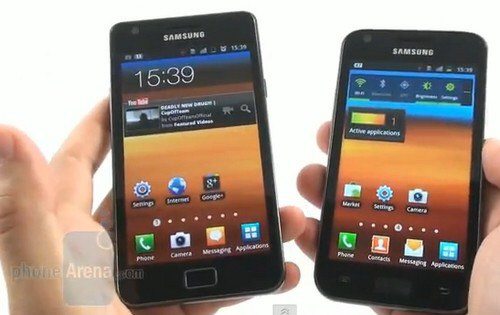