Apple Stores Will Allow Just About Anything: Video

In the past we have all seen videos of people in Apple stores dancing, singing and even group dancing but it seems that Apple employees never put a stop to what visitors do in their stores, so the question is just what can you actually get away with in an Apple store? So we are about to find out the answer to that by way of a video, which we have for your viewing pleasure below.

The Mark Malkoff: Apple Store Challenge video comes our way courtesy of the guys over at the Gothamist and by way of My Damn Channel and delivers a three and a half minute look at what comedian Mark Malkoff can get away with in an Apple store.

Apparently Malkoff’s goal is to “test the metal” of Apple staff at Apple stores in the New York area to find out just what one can get away with doing, and I have to say it seems you can do just about anything in an Apple store without being challenged by the staff.

Malkoff starts off by ordering and consuming a pizza at an Apple store and although slightly challenged by a member of staff that asks “Did you just have a pizza delivered to the floor?” and Malkoff replies “yeah,” the employee simply replied “That’s awesome.”

Other shenanigans Malkoff gets up to include having a romantic date with his extremely tall wife including trumpet player and glitter ball, and of course dancing, and even turns up as Star Wars main villain, the dark lord himself, Darth Vader and gets an Apple employee to fix his iPhone, and let’s be honest its not often Darth Vader turns up in your store, however the Apple staff do have a joke by telling him to “use the force” before fixing his iOS smartphone.

Finally Malkoff turns to pets in the Apple store, but no ordinary pet such as a dog but rather he walks into the store with a goat on a lead, but does the staff finally draw the line at having a goat in their store? Well to find that one out head on down and mash that play button and enjoy this humorous footage.

So who is up for a challenge? Anyone care to do something outrageous in an Apple store and video the occasion and give us a link to the footage by posting it to our comments area below and we’ll see just what an Apple store is really prepared to put up with, any takers? 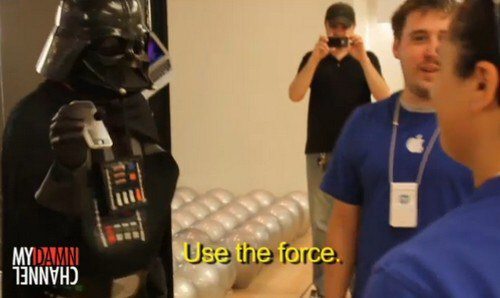