The Motorola Droid Bionic it seems is still a mystery when it comes to release dates, there are plenty of rumours going around to make you think for a bit, but the latest speculation says that the smartphone will be releasing on August 4 according to a screenshot of an indirect retailers note. Please remember nothing is set in stone until official confirmation.

Apparently Indirect Verizon dealers will be expecting the Droid Bionic August 4, you can clearly see in the image below (IF REAL) it says Release Date: 8/4/2011, display units of the smartphone will be arriving at Verizon Stores on July 29 (This Friday), and the actual stock will be arriving August 1 for Thursday’s August 4 launch.

Now it is the case of true or false: When a new smartphone is about to be released so many dates are mentioned, which one is true is beyond our knowledge as no official confirmation has been put out yet. 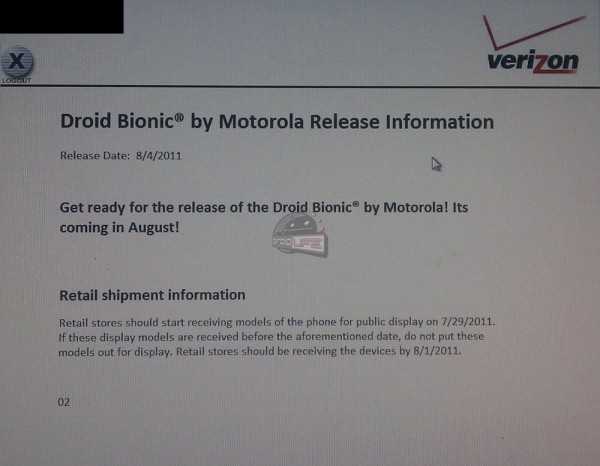 If you visit Droid-Life they mention that there was a lot of spelling mistakes in the screenshot such as the word received was spelled “recived” and “recieve”, if its fake then that is understandable, but if it is real then the department who put the note out really needs some spelling lessons.

We published an article two days ago reporting that Sam’s Club was releasing the Droid Bionic in September and NOT August like first suspected, read more about this here.

Anyway, whilst on the subject of the Motorola Droid Bionic, it looks like Best Buy will be getting some cases for this smartphone by August 20.

Yes you got it, another rumour; below you will see a screenshot via Droid-Life showing that some cases that are compatible with the Motorola Droid Bionic Android smartphone, apparently the store will get them in August 20.

Now we are not sure if any of the above is true or indeed rumours, but we thought we would let our readers know what is going on.

Do you think the above dates are correct or do you think it is a way of getting more media attention online? We do not like to spread rumours but merely report what is happening, and as always please take it all with a pinch of salt and wait for official announcements, confirmations etc.

By all means please do post your comments below, they are most welcome and of course we love reading them as so do other Phones Review readers. Thanks