As you have no doubt heard on numerous occasions, the rumour is Apple is looking at delivering a lower priced inexpensive version of the iPhone, which is being called the iPhone 4S, and the latest word on that smartphone is that the iOS handset will be cheaper due to the glass being replaced by plastic.

According to an article over on Phone Arena by way of Vietnamese site Tinhte, the same source that outed the images of the iPhone 4 last year, a guy called Cuhiep, is claiming knowledge from a “reliable source” on the iPhone 4S.

Apparently this “reliable source,” unnamed of course, sent this guy an image of a device that resembles a white iPhone 4, which apparently “feels faster and lighter” the reason for this is both glass panels have been removed and replaced by plastic.

The Phone Arena guys say they can’t vouch for the validity of the photo or claim, and say that faster performance could be explained with the device having a dual core A5 chipset, and apparently the cost of putting the A5 into the iPhone 4S rather than the iPhone 4’s single core A4 is plausible.

Having said that, the guys find it somewhat dubious that Apple would swap out the glass panels for plastic ones, since Apple seems to be all about the premium feel of their gear; however if Apple is to deliver a cheaper iPhone, then the way to get that cost down could be to get rid of expensive glass for cheaper plastic.

Furthermore they guys suggest that the flash refection in one of the images doesn’t seem to be reflecting as one would expect on polished glass, but they do admit that could be down to their eyes being tired.

Personally I think that if Apple is going to go down market with the iPhone 4S and change that glass for plastic, as Apple relies on their reputation of delivering premium quality devices, as my iOS fanboy friends continually tell me, then one would have thought if Apple does use plastic panels for the iPhone 4S perhaps they are of the highest quality plastic, otherwise their “premium quality device” tag could be damaged.

So time to hand it over to you guys, what do you think, will Apple deliver an iPhone 4S sporting plastic panels rather than polished glass to get that all-important lower price? 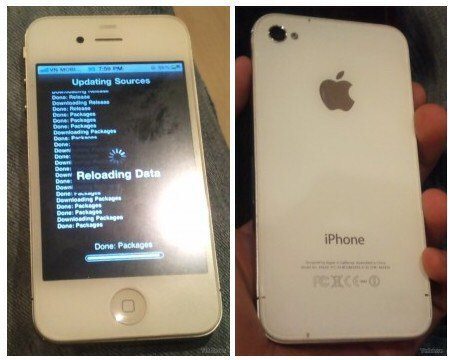