The Android slate unboxing and hands-on video comes our way courtesy of the guys over at Slash Gear and delivers a four and a half minute look at the 4G LTE toting tablet to see if there are any differences between the two Samsung slates.

The guys say that visually the Verizon LTE Galaxy Tab 10.1 and the WiFi only Samsung Galaxy Tab 10.1 are almost the same and are both available in both grey and white, but the power and volume controls have been moved from the top to the left edge on the Verizon version.

Both models come with the 3 megapixel rear facing camera with flash and front facing camera and also 16GB and 32GB versions and 3.5mm jack. The main difference with the Verizon tablet is though the 4G LTE SIM card as the original version doesn’t support the LTE SIM card.

The guys say that the NVIDIA Tegra 2 processor is still “swift” and performance is generally “slick” while the user experience is solid, but the main advantage with the new version is that the user can now jump online without requiring WiFi and surf at 4G LTE speeds.

The guys say that they will be benchmarking the Verizon 4G LTE Samsung Galaxy Tab 10.1 in their full review to see if the Android tablet is actually worth that $529.99 plus price tag on a two-year contract.

So basically spec wise you are still looking at the same as the WiFi model such as 10.1-inch 1280 x 800 display, 1080p and 720p video recording, accelerometer, proximity sensor, ambient light sensor, 7000mAh battery, and Android 3.1 Honeycomb operating system but of course with the addition of 4G LTE connectivity.

So that’s about it until such times are the reviews hit the net waves, so until then I’ll let you head on down to mash that play button to check out the unboxing and hands-on with the Verizon 4G LTE enabled Samsung Galaxy Tab 10.1…enjoy. 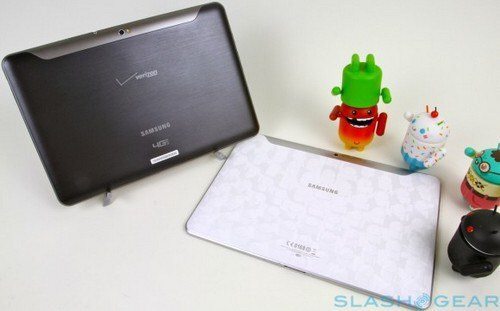