iPhone 5 Could Be, Possibly, Maybe Spotted

Apple employee walks into a bar, and leaves behind a next generation iPhone, I’m sure you all remember just how the iPhone 4 was prematurely revealed and the following commotion that ensued causing the net to explode with curiosity. Well what we have here is the latest rumour of the iPhone 5 that reminds us of that particular happening.

This time round though the latest piece in the new iPhone jigsaw, is a whole lot thinner, as according to an article over on 9to5 Mac, a reader of theirs believes he has seen a possible Apple employee in San Francisco using what the readers believes is the iPhone 5, and snapped a not too clear image and sent it into the guys at 9to5 Mac.

Apparently the reader managed to get a fairly good look at the handset and does say the image doesn’t do it justice, so the guys contacted the tipster and they now believe the tipster saw “a totally new Apple device, probably a prototype iPhone 5.”

According to the tipster, this new Apple device “looked too amazing to be built by anyone besides Apple,” and claims the handset has an “almost EVO-like” display size, with rounded metal edges like that on the Samsung Galaxy Tab 10.1, (take note Samsung, perhaps fodder for that copying the look and feel lawsuit) and appears to be thinner and wider than the current iPhone 4.

Apparently the back of the device is curved glass or plastic although the tipster wasn’t sure, but would guess at glass. Also the tipster believes that the person using the device was “trying to hide he had more than the average smartphone user.”

The tipster says he didn’t get to see the home button and the Apple logo was concealed by the user all but for a brief moment, but does say that the smartphone would fit perfectly into the green case that 9to5 Mac had posted previously.

So there you have it, one guy claiming that he’s seen a possible Apple employee using what he presumes to be the iPhone 5 out in the wild in San Francisco. I have to say that looking at the image, which can be seen below, that’s drawing some pretty big conclusions and isn’t really any hard evidence.

But who knows, this unnamed tipster could be, possibly, maybe correct in his assumptions, but then again it could be something completely different, as I’m fairly sure after what happened with the iPhone 4, Apple would have learnt their lesson and vigorously instructed employees to make sure no one spots their new devices before time.

So what do our readers think, could this picture actually be the first sighting of the next generation iOS smartphone? Feel free to voice your opinions to our comments area below. 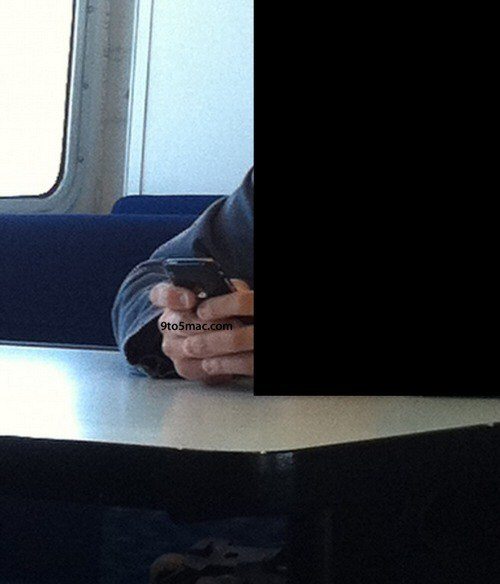