For the Android faithful that would rather have white than black, it appears that the successor to the Samsung Galaxy S could well be on its way packing some heavenly whiteness coat and following the realms of the white Nexus S and challenge that now rather old white iPhone 4.

The guys say that potential purchasers of the Samsung Galaxy S II in the United States can now sing up for more information on the Android 2.3 Gingerbread smartphone over on the Samsung website, so they should see the handset materialise in the not too distant future.

Of course this whiter than white version of the Samsung galaxy S II could be a fake, as there’s no official word that a white model will make it to the mobile space, but I have to say if it does it sure does look attractive all dressed up in that virginal hue.

Personally as I have said before, my first foray into the Android arena was with the T-Mobile G1 and that was a white model, and if there had been a white version of my Samsung Galaxy S available when I upgraded I would have opted for that but as it is my handset is black, still beautiful, but not white.

Of course if Sammy does deliver the Galaxy S II in white then no doubt Apple will quickly have their legal team filing more legal action against Sammy for copying the look and feel of the white iPhone 4, but looking at the image, I’d say its not copied but better looking than the white iPhone 4, but then again I am one of the Android faithful so make of that what you will.

Anyway, does the possibility of a white Samsung Galaxy S II capture the interest of any of our Android readers out there, if so feel free to voice your opinions on the device to our comments area below, after a fitting drooling period of course. 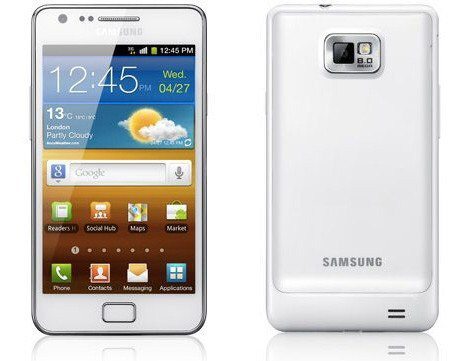