It appears that there are a couple of new Windows Phone 7 smartphone gearing up for release to the mobile space and both devices are from the HTC camp, the HTC Prime and HTC Ignite, which have been listed as coming soon on a Dutch website.

According to the guys over at Tweekers, the Dutch subsidiary of the United Kingdom’s Carphone Warehouse, Phone House, has listed both HTC Windows Phone 7 handsets as coming soon, but there is no other information.

The HTC Ignite hasn’t yet been officially announced by HTC, however according to the guys over at Phone Arena the specs for the HTC Ignite Windows Phone are a 3.7-inch touch screen, a 5 megapixel camera with video capture, A-GPS, Bluetooth, and 512MB RAM, and Windows Phone 7 operating system.

When it comes to the HTC Prime, we’ve heard of the smartphone previously, and the specs for the HTC Prime are a 3.7-inch WVGA touch screen, slide out QWERTY keyboard, 5 megapixel camera with flash, 512MB RAM, Windows Phone 7 OS, and apparently that QWERTY keyboard has oval shaped keys but again like the HTC Ignite little else is known at this time.

The article does say though that both the HTC Ignite and HTC Prime run Windows Phone OS “which is likely to be the new Mango.”

Thus it would appear, although there is no hard and fast release date for both these Windows Phone devices, as the Dutch website has listed them as coming soon, one could expect them to hit the mobile arena sometime in the not too distant future.

Something to also note, whilst checking out the listing, there is also a place for the next generation iOS smartphone from Apple, the iPhone 5 with a big question mark, which means they too are expecting the iPhone 5 to be coming soon, so just thought I’d mention that in passing.

Other smartphones found on the coming soon page include the BlackBerry Bold Touch 9900 expected October 1, HTC EVO 3D for what looks like the 8th of August, and the HTC Gratia.

Other than that, not a great deal else can be gleaned from the information, but if you are in the market for the HTC Prime or HTC Ignite they is appears you may not have too much longer to wait. 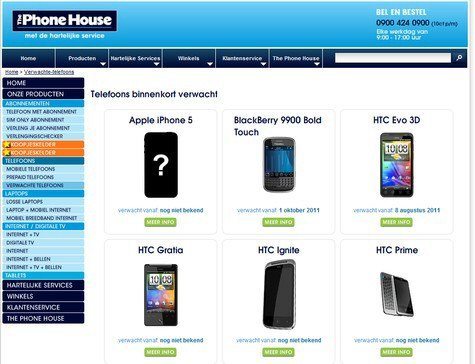