emirBytes has developed a new game for iOS devices called “Blast The Droids” and is now available via the App Store (iTunes), this game is very addictive especially if you like to shoot the Droids out of the sky.

The Droids are in the shape of the Android Robot and you the iOS controller plays as a tank and you need to shoot the to kill the droids, this new game uses the touch sensors for great gameplay and the Game Center integration ensures players to try their best to beat the highest scores.

The Droids can change into nuclear bombs so be careful Apple fans; there are many different colour droids each given separate upgrade crates when you destroy them. The more you get the more you can repair your tank if it gets damaged, gain extra speed, upgrade your armour and get the cool super mode.

You can also harvest crystals within the game and you can exchange them with ammo when the Carrier Ship arrives. Main features include: Infinite Levels, which means you can play forever, Game Center Leaderboard and Achievements, Local High Score, Upgradable tank, Super Mode and Dynamic environment design.

Device Requirements: iPhone, iPod touch, and iPad, you will need iOS 3.2 or later and at least 10 MB spare space in your memory.

This game is very addictive and fun, it is even better if you want to get revenge on the Droids, sorry Android lovers but we really wanted to show this game off a little. Maybe the Android Market should contain the Blast the iOS, how cool would that be.

If you have already installed Blast the Droids, please do let us know what you think of it. We would love to read your comments on why you love iOS better than Android and of course visa versa.

Below we have added a few screen shots and a video showing the game play of Blast the Droids, go and get it now and then please send in your reviews, let the battle begin. Android Vs iOS battle is commencing. 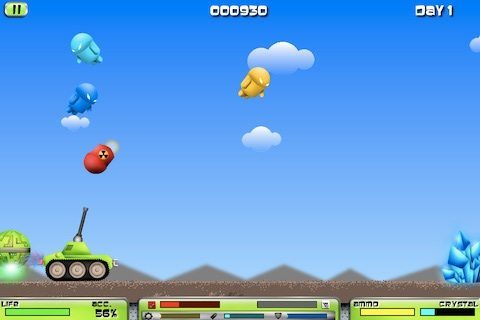 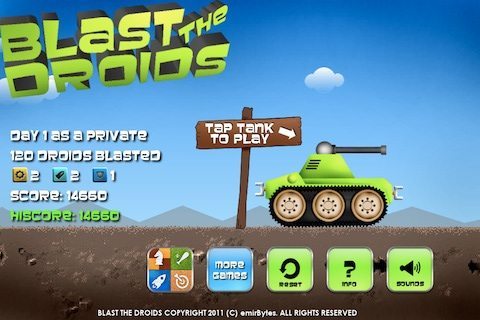