Calling out to all Android users, a new Android Trojan has been found that can record your phone conversations and we would love to know if this has happened to you yet.

Dinesh Venkatesan, CA security’s researcher reports that the new malware will run on Android devices after they have installed it without knowing about it, once it is on your device it will record phone conversations and mimics a standard installation screen for legitimate applications.

If Android users click on the “install,” a configuration file will be to the mobile phone with some sort of key information about the remote server and the parameters,” suggesting that the phone calls can be accessed over the Web by the malware’s creator according to

Once the Trojan is on your device the malware will come into play and record conversations onto the device’s installed SD card in a directory called “shangzhou / callrecord.” CA Technologies reports that the malware saves the conversation as an ARM file.

Because Android is becoming ever so popular it will always encounter more Trojan infections that any other operating system, malware is being found quite often lately such as the DroidDream Trojan.

This is where Android users should start using security software to safeguard themselves, be vigilant and DO NOT click anything on your phones if you are not sure, only install apps or software via the Android Market and then that way you know you are safe.

Only install apps via sources that are trusted, if you are not sure if the source is a trusted one just pop into Android Forums or ask us at PhonesReview and our readers will answer questions for you. We will ask our followers on Facebook, Twitter and Google+, we will always try getting the answers you require.

Why not think about running antivirus software on your Android handsets, at least this will prevent majority of threats.

Android users could you please let us know if you have had the Android Trojan problem that records your phone conversations. We would love to know if you have had any other software issues with your phone, have you been hacked, bricked, any problem you are having due to Trojans / malwares etc would be great if you could share. Thanks

If you have discovered something wrong and you think your handset has been infected, please let us know what make and model your Android phone is and what problems are occurring. 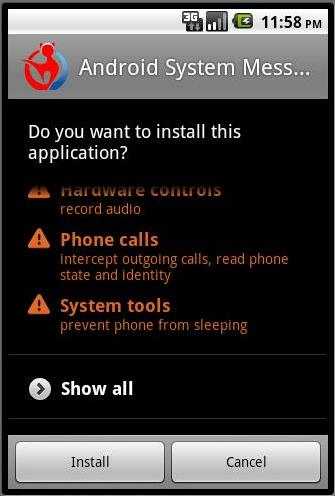