The makers of the Rubik’s Cube game for iOS devices has announced the app has now received an important update that integrates Foursquare, the popular location based social platform, and version 1.0.8 of the Rubik’s Cube app now enables users to check in with Foursquare as key points within the game.

With the update, the Rubik’s Cube app for the iPhone, iPod Tocuh and Apple iPad enables the user to share their location and game progress with their Foursquare friends and thus add to the fun and also paves the way for more social network integration in future releases.

Jon Criswick, Magmic CEO says, “The implementation of Foursquare in Rubik’s Cube is just the beginning of a shift in how people use mobile games. Magmic is at the forefront of the natural evolution of mobile entertainment into real world interaction. Aligning one of our top selling titles with Foursquare’s 10 million registered users is the next step forward as we continue to define the experience of mobile social gaming.”

The integration of Foursquare in the Rubik’s Cube app for iOS devices enables players of casual games to reach out and connect with other players within a location specific context, meaning if you have a foursquare account you can now share where and when you are playing the game with likeminded people.

The Rubik’s Cube app for the Apple iPad, iPod Touch and iPhone is the only official Rubik’s Cube game for iOS devices, and offers great graphics, innovative features such as customisable cubes, along with a 3D option that makes it the ultimate puzzle application.

Apparently the Rubik’s Cube for iOS has already been downloaded in excess of 600,000 times and has garners five star ratings from half of the game’s reviewers.

For those wishing to download the Rubik’s Cube game you can download the app to your chosen iOS device running iOS 3.0 or above from iTunes at a cost of $2.99.

And we have for your viewing pleasure below a video demo of the Rubik’s Cube for the iPhone, iPod Touch and Apple iPad, so feel free to check that out if you haven’t already grabbed the app from iTunes…enjoy. 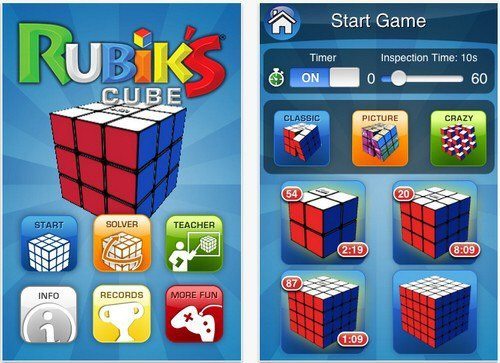