Now I have always thought there was something strange about the Japanese and their gadgets, but I have to say this particular case for the iPhone 4 has me somewhat baffled. The iPhone accessory is called The Hand Case for iPhone, and slaps a hand to the back of your iOS smartphone, something I find really weird!

The Hand Case for the iPhone 4 is brought to our attention by the guys over at Phone Arena by way of Japanese site Rakuten, and apparently the hand protects your beloved smartphone whilst enabling the user to caress it when going through a touch call…yep like I said…weird!

Apparently there are two version of The Hand Case for the iPhone; a ladies hand, which apparently is named “Nami” while the second case, features a child’s hand which is apparently named Yamato and actually leave space to use the camera white the lady’s hand doesn’t so I would have thought pretty useless when taking photos.

Personally I can’t really see the point of The Hand case for the iPhone, but I figure its whatever floats your boat, perhaps some people would love to hold hands with their iPhone every time they use it, I don’t know.

Furthermore adding that extra spare hand to the iOS smartphone would surely make it somewhat cumbersome to carry and exceedingly un-pocket friendly, although I guess lady users could carry it in their handbag.

As it stand, The Hand Case for the iPhone whether you opt to have the adult version of the child’s version will set you back $69, and apparently when placing your iPhone face down the hand is good for holding such things as pens and glasses.

So would you be tempted to pick up The Hand case for your iPhone or do you think it is simply just too weird of an iPhone accessory to grace your own iPhone with? Brings a whole new meaning to lending a hand doesn’t it. 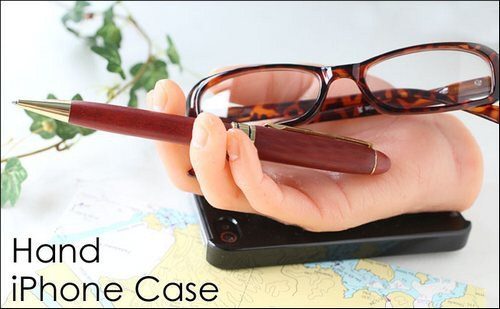