Of course when a smartphone such as the Motorola Droid Bionic is constantly delayed, everyone wants to know when that handset will finally come out to play, and when a new smartphone such as the Samsung Stratosphere gets coverage, again most want to know when the device will hit, as it appears that the possible release date for those devices along with numerous others on Verizon have been outed.

According to an article over on IGN, an unnamed source had delivered an internal document shot of the Big Red’s upcoming devices along with potential release dated for each device and included the much delayed Motorola Droid Bionic which is apparently scheduled for release on the 8th of September.

The BlackBerry Curve 9370 is there as well with a release date of September the 8th, a device the article says is previously unannounced. The female orientated HTC Bliss has a scheduled release date of the 29th of Sept along with the Samsung Illusion, also known as the Samsung Viper.

So there you have it, of course all the release dates aren’t set in stone and could be subject to change but if all goes as this leaked Verizon internal document suggests then Verizon customers will have several device to look forward to in the coming months.

Shame the only device missing that would have set peoples hearts aflutter is the release date for the iPhone 5 on Verizon, but then you didn’t really expect that to get outed just yet did you? 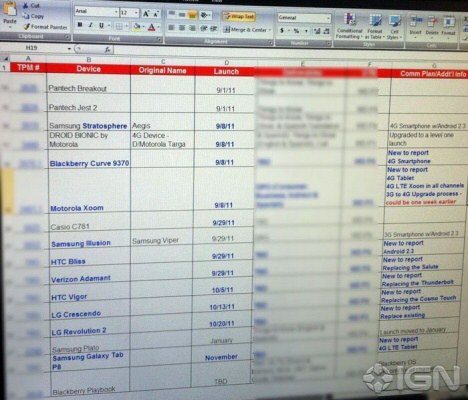