A couple of days ago we posted an article concerning the HP TouchPad and that HP was now offering a 50 buck instant rebate on the webOS slate, which brought the price for the 16GB version down to $449.99, which was then matched by other sellers. However it appears that the 16GB HP TouchPad is now being offered for even less than that $449.99.

The guys over at Woot Have now dropped the price of the 16GB WiFi HP TouchPad down to a nice low $379.99 with a shipping charge of $5 bringing the total cost of the webOS slate to $384.99, which has to be seen as a fairly reasonable deal.

The blurb on the Woot page says, “With HP webOS you can search the web while writing email. Reply to a notification while scrolling through a playlist. Or update your FacebookÂ® status just by starting to type. It’s so intuitive, you just think about what you want to do, not how you have to do it. Immerse yourself in entertainment and gaming action. Transfer your favorite songs from your personal collection and take them to go. And listen to your music with amazing sound quality thanks to Beats Audioâ„¢.”

Since the launch of the HP tablet, the TouchPad seems to have had a bit of a hard time when compared to rivals like the Apple iPad 2 and Android slates, but obviously that is to be expected with the first webOS tablet out of the HP came.

And one can presume that this is why HP offered that $50 instant rebate on the tablet in the first place, to strum up better sales of the 740 gram device, whether that will actually attract more sales for HP remains to be seen.

But if you have been pondering on whether to pick up the HP TouchPad, it would appear that now is the time to go grab it, and that the lowest price available thus far looks to be from Woot, of course that lower price will probably stop once the company runs out of stock so if you do what the slate you’d better act quickly. 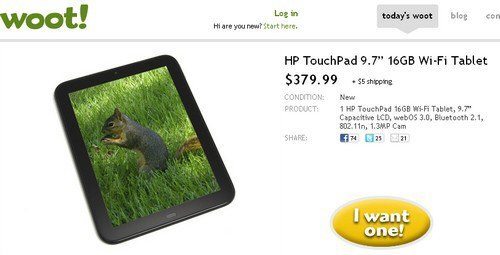