Obviously Motorola isn’t going to stand still in the mobile arena and will at some point in the future push out new devices, and one of those new devices is rumoured to be what is known as the Motorola Kore, which is presumed to be Motorola’s next Android slate.

According to the guys over at Android Community, the people over at Fusible have spotted five new domains Motorola has registered, and all to do with the Kore, said domains are MotorolaKore.com, KoreMotorola.com, MotoKore.com, Moto-Kore.com and Motorola-Kore.com.

As you can tell each of the domains uses a variation of Motorola and Kore, and were apparently purchased on Wednesday but currently so not link to any Motorola web pages, but no doubt will do at some point in the future.

But what is this Motorola Kore device; well the guys speculate that it could be Motorola’s next generation Android tablet, which could possibly run Android Ice Cream Sandwich by the time the device surfaces.

According to the guys over on Slash Gear, Motorola has confirmed that they have a “new smaller 4G LTE tablet in their roadmap,” and thus the guys speculate that the Motorola Kore could well be that smaller Android slate.

However as it stand there are not specification details available for the Motorola Kore, so it is also quite possible that the Kore could turn our to be a new Motorola Android smartphone.

If the Motorola Kore is a new Android Ice Cream Sandwich toting tablet could it be the successor to Motorola’s first Android slate the Motorola Xoom, a device that is still waiting to be upgraded with support for the Big Red’s 4G LTE network.

Who really knows, for now the Motorola Kore is somewhat of a mystery and will remain so until such time more on the device surfaces, and of course as soon as those details surface we will pass them along.

Anyone care to take a guess at whether the Motorola Kore will turn out to be the Motorola Xoom successor or a smartphone?

Update: Apparently according to the guys over at Fusible, the Motorola Kore is neither a smartphone nor tablet but is in fact a monitoring device for fitness, so now you know. 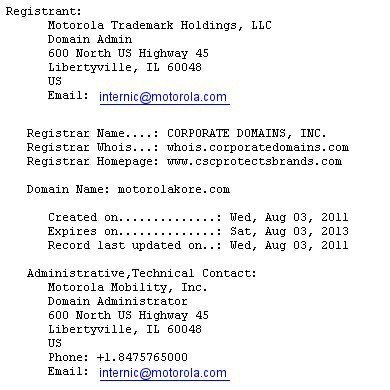