Galaxy S II In White On O2 UK In September

Obviously the biggest seller for Samsung un the smartphone marker at the moment is the Samsung Galaxy S II, originally offered in just black but now being offering in a nice heavenly white, and the latest word is that O2 UK will also offer the white version of the device.

According to the guys over at Unwired View, the UK operator O2 has now put up a Samsung Galaxy S II in white page on their website stating the Android 2.3 Gingerbread handset is coming soon: September.

Obviously they don’t give a hard and fast availability date, but at least those in the United Kingdom who prefer O2 for their handsets now know they will be able to snap up the white Galaxy S II in September if they wish, and possibly as a free device on selected tariffs.

Whether Samsung will release the Samsung Galaxy S II in white in other markets is currently unknown, but considering the popularity of the Android handset I personally can’t see any reason for them not to do so.

Personally being one of the Android faithful, if I were to upgrade to the Samsung Galaxy S II I would wait until I could grab the device in that nice white jacket as I do think white looks better on some handsets than black and adds a certain refinement to the handset.

According to the O2 Samsung Galaxy S II web page blurb, “The Samsung Galaxy S II White, incredibly thin but also amazingly powerful. Experience super fast, ultra responsive gaming, or record and watch crystal clear movies in full HD whilst running all of your favourite apps. You’ll enjoy it all on the most colourful and captivating Samsung Super Amoled plus Screen.”

So to all our UK readers I’ll ask this question, does the white version of the Samsung Galaxy S II attract your attention more than the black model and are you going to pick up the white model as soon as it becomes available? 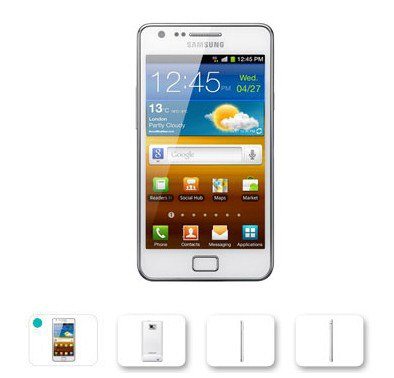