Android Versus iOS US State Comparison

So what we have here for your consideration is a map, that can be seen below, of which US state appears to be dominated by what mobile platform bases on ad tracking data of roughly 83 million users on mobile advertising company Jumptap who came up with this map as part of their monthly statistics report.

According to an article over on Gigaom, the Jumptap map doesn’t actually signify platform or device sales state by state, but gives a reasonable overview of where in the United States different smartphone platforms are generally being used.

The map kind of shows the Android and iOS platform battle throwing in a little BlackBerry dominance for good measure, and it appears that the iOS faithful is Northeast and Midwest states, while Android is more South and Southwest although there are a few neutral states in there too.

Apparently the Jumptap statistics also tracked ad clicks by handset maker, which they say…”Manufacture analysis showed that Sony Ericsson devices are the only Android devices with ad performance nearing that of iOS devices. Ads running on Sony Ericsson devices in the first half of 2011 averaged a .54% click-through rate, making it the only Android manufacturer above the industry average of .52%, but still not as high as iOS devices at .78%.”

Yes well it maybe all to do with mobile advertising but it does seem to me when I look at this map that Android seems to be more widely used that rival iOS, maybe it’s because that yellow seems to stand out more than that blue I don’t know, and the yellow coloured states do look bigger than those blue ones.

Obviously the map does show that Research in Motion’s BlackBerry simply isn’t doing too well when compared to rivals Android and iOS, but then we are all well aware of that anyway.

Still it’s nice to get a visual of Android against iOS in the good ole US of A once and a while, which may not mean anything in real terms, but for me it seems that there is a bit of North and South divide in the smartphone platform game, what do you think? 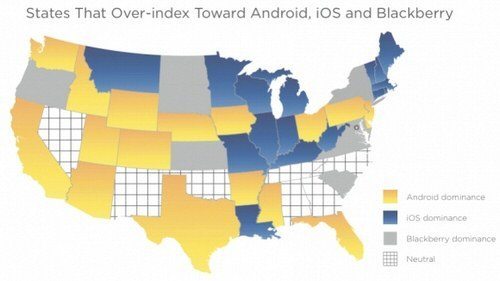