Now, god forbid you ever need to use a new iOS app that has just been released by the Federal Bureau of Investigation, called the FBI Child ID app for iOS devices, but if you do have children then perhaps it is a good idea to have this official FBI application on your Apple device.

The FBI Child ID App for iOS Devices enables the parents of children to electronically store vital information along with photos of their children, so that if the worse should ever happen and your child goes missing all the information you require to hand to the FBI is at hand.

Using the FBI Child ID App for the iPhone, iPod Touch and Apple iPad, the user will be able to provide physical identifiers such as height and weight of their child along with a photo on the spot to police or security, and features a special tab where the user can quickly email the authorities.

The FBI Child ID App for iOS Devices also features invaluable tips on how to keep your children safe and also specific information as to what to do in those first crucial hours if the unthinkable does happen and your child goes missing.

Have to say that although it’s probably unlikely your child will go missing; one does have to say it’s always best to be prepared just in case the unthinkable does happen to you, and at least with the FBI Child ID App for iOS Devices you will have all that info at hand to hand over to the law as soon as possible, and the quicker they have that information the faster they can move.

So if you are in the United States obviously, and would like to take advantage of this precautionary iOS app you can download it as a free app to your Apple iPad, iPod Touch or iPhone running iOS 4.2 or above from iTunes. 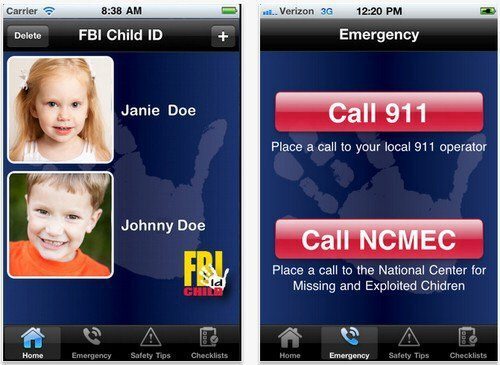