Well now if you are one of the BlackBerry faithful over this side of the pond in the United Kingdome who has been awaiting the arrival of the BlackBerry Bold 9900 from research In Motion, you just might like to know that Vodafone now has the Bold 9900 available for pre-order.

According to the guys over at Pocket Now, any interested party can now place their pre-order for the BlackBerry OS 7 smartphone with Vodafone UK with a targeted delivery date of the 16th of this month.

Potential owners can gain the BlackBerry Bold 9900 handset as a free device from Vodafone on plan of Â£41 per month for which you will get 1200 minutes, unlimited texts, and 500MB data on a 2-year term or you can get the BlackBerry Bold 9900 as a free device on an 18 month term for Â£46 per month and receive the same deal as the Â£41 a month option.

However when it comes to gaining the RIM smartphone at a cheaper monthly price point the smartphone is going to set you back a chunk of cash upfront for example if you wish to pay 36 quid a month the device will cost you Â£99, or at Â£31 a month you will shell out Â£199, opting for Â£26 a month means the device will cost Â£299 and if you opt for the lowed monthly outlay of Â£20.50 a month the handset will hit you for Â£399.

I’m sure you already know the specs of the BlackBerry Bold 9900 but in case you missed them here’s a quick reminder, 2.8-inch touch screen, QWERTY keyboard, 5 megapixel auto-focus camera with LED flash and 720p video, 1.2GHz processor, BlackBerry OS 7, 768MB RAM, 8GB internal storage, microSD expansion up to 32GB and is apparently the thinnest BlackBerry ever at 10.5mm.

So I figure in the economic climate the UK has today most will likely opt for a free device on that 41 quid a month option, although personally I still think that is a bit of a steep monthly outlay for a BlackBerry handset when you could get the latest Android handset the Samsung Galaxy S II as a free device from Vodafone for as little as Â£36 a month, so with that in mind will you be hitting up Vodafone to pre-order the BlackBerry Bold 9900? 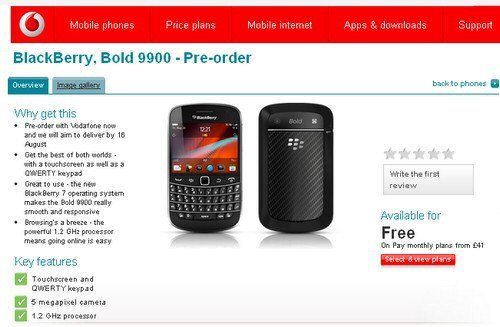