So just how easy is it to steal digital content from a device such as intercepting a phone call, mails, Internet connections over GSM networks, WiFi and Bluetooth? Well apparently its not all that difficult and isn’t expensive to accomplish either, so could be a boon to cyber terrorists who wish to launch a cyber attack just about anywhere.

According to an article over on Crazy Engineers, Rich Perkins and Mike Tassey while at the BlackHat USA (Defcon) 2001 hacker’s summit, showed off their Wireless Arial Surveillance Platform (WASP) drone in front of AFP reporters.

The WASP drone is an unmanned Arial device that was easily built using available gadgets and materials on today’s market and weights in at 14 pounds and has the ability to steal digital content such as GSM mobile data that has been sent and received on a cellular network.

The WASP can also apparently carry a payload of bombs and act as a dropping vehicle for terrorists and smugglers, however the guys built the WASP to show government agencies and the cyber security industry just how possibly and cheap it is for people with the intent on creating cyber havoc to make a drone such as the WASP.

Apparently the WASP can act as a “pseudo cell tower” and tap into call and jeopardise a firm’s computer network by “breaking into unsecure wireless network setup in public places and other internet hotspots.”

Also the WASP can single out an individual and track their location, mobile phone call details, digital activities, and can apparently also impersonate said person and send out fake calls, fake emails, and steal data, an apparently can do all this even when you are using a secure connection.

According to the AFP, “The drone can grab GMS mobile phone identification numbers that can then be used to bill outgoing calls. It can also let hackers impersonate cell phone towers and eavesdrop on people’s calls. Second-hand drones such as that used for WASP can be bought online for about $150.”

However apparently there is also a good side to the WASP as it can be used as a mobile cell towers in places where towers have been destroyed by wars or natural disasters. We have a video of the WASP demonstration for your viewing pleasure below courtesy of Rabbit Hole who has also posted the specifications of the WASP for all to view.

Seems to me that if it is so simple and inexpensive for people to construct this type of drone, perhaps security agencies and the like should be doing something to prevent it, as who wants anyone intercepting their private phone calls and email and the like. 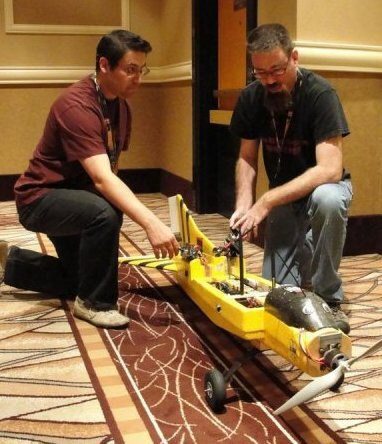