Well now Apple has now released iOS 5 Beta 5 to developers as reported earlier by my colleague Mark, so what we have for your viewing pleasure below is a short video of iOS 5 Beta 5 in action and showing off some of the features in the latest Beta release.

The iOS 5 Beta 5 video footage comes out way courtesy of the guys over at Daily iPhone Blog and by way of YouTube user Nates TechUpdate, and delivers just over tow and a half minutes of previewing iOS 5 Beta 5.

The iOS 5 update comes in at 128MB, which is about the same size as iOS 5 Beta 4, contains improvements and bug fixes, and the over the air update took roughly ten minutes to download and install on the iPhone 4.

According to the video page blurb, “In the Accessibility section is a new hearing aid mode feature which improves compatibility with hearing aids in some circumstances. May reduce 2g cellular coverage.”

Furthermore, the guys other at the Boy Genius Report have now posted the full change log for iOS 5 Beta 5 and you can check that out by hitting up their website.

According to Mark’s earlier post, iOS 5 Beta 5 does indeed support the new speech to text functionality, which might be released to users sometime this fall, and the presence of speech to text is confirmed in this video.

Other new stuff in the footage includes more info buttons on iCloud, on the personal set up screen as well as iCloud backup screen, and the same info button can be found on Find My iPhone, and if you hit the home button there is now an option to go to the WiFi settings.

Anyway I don’t really want to spoil your viewing of the video, so I’ll simply leave it right there and let you head on down to mash that play button and check out the iOS 5 Beta 5 features footage…enjoy. 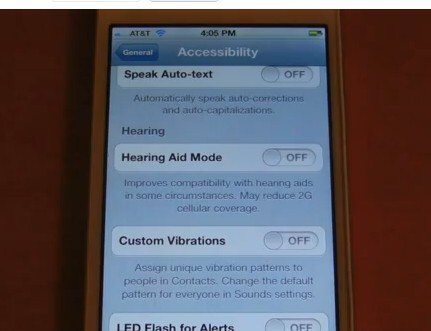