Well now considering how well Sammy’s latest and greatest Android flagship smartphone, the Samsung Galaxy S II is doing, imagine how much better the Galaxy S II would have done if the device had come out to play sporting some 4G LTE sweetness in tow. Well word is there just might be a 4G enabled Galaxy S II on the horizon with the Samsung Celox.

According to an article over on Phone Arena, by way of Korean website IT Long, the new Samsung Celox has been spotted in South Korea and appears to be a larger but similar model of the Samsung Galaxy S II and with 4G LTE radios.

However apparently the Samsung Celox LTE is only supported in the 800 MHz range, which suggests that the Samsung Celox might come out to play in Europe at some point but unlikely to surface in the good old US of A as such US carriers as Verizon and AT&T use LTE in the 700 MHz range.

So what does the Samsung Celox offer other than that tasty LTE? Well apparently the handset is an Android Gingerbread device with a 4.5-inch WVGA Super AMOLED Plus touch screen, 8 megapixel auto-focus rear facing camera with LED Flash, 2 megapixel front facing camera, Bluetooth 3.0, WiFi, A-GPS and TouchWiz 4.0 and a Qualcomm Snapdragon APQ8060 chip.

The guys say that design wise the Samsung Celox reminds them of the Samsung Galaxy Z, and as for pricing of the new Android handset well that hasn’t been announced yet, nor if Samsung has any intensions on delivering the Samsung Celox anywhere outside South Korea of course, but as soon as we hear more we will let you know.

So there you have it, and who knows, if the Samsung Celox turns out to be a big hit like the Galaxy S II then perhaps old Sammy will swap that 800MHz for 700MHz so the device can play nice stateside on their LTE networks at some point in the future. 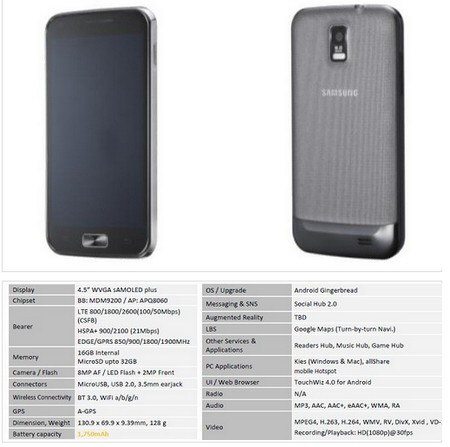