Apple Gear Removed From UK Stores Due To Riots

No doubt the whole world is aware that the United Kingdom is not in the grip of rioting, which began in London after the shooting of Mark Duggan, and the riots have caused retailers to close up shop early and pull down shutters in an attempt to protect their good from looting, and it now appears that Apple has also taken the stance of removing Apple gear from their stores.

According to the guys over at 9to5 Mac, they have been receiving pictures from across the UK that show that Apple has removed all their products from display after closing for the day, no doubt in an attempt to put temptation out of the sight of rioters.

The Apple Store in Liverpool One is one of the pictures (above) while apparently Apple resellers are following suit in such places as Canterbury (below), and no doubt more will follow to remove tempting items such as the iPhone 4 and Apple iPad 2 from the sight of rioters.

It has also come to light that BlackBerry smartphones seem to have played a major role in the organisation of riots in the UK as rioters use BlackBerry Messenger to contact each other due to the BlackBerry encryption of messages.

It appears that the riots are spreading across the United Kingdom, and no doubt many other cities and towns will see the mindless fighting, burning and looting over the coming days, and some have said that the army should be called in to bring order to the streets.

Personally I think firstly, the killing of Mark Duggan was the catalyst that sparked off the unrest, but these riots are no longer about that shooting, there is a deeper underlying unrest in the people due to the downslide of the country with the government imposing wide ranging cuts and insufficient employment opportunities for the younger generation, something the government will need to address. However, rioting is not the answer and is not acceptable, and more peaceful means should be found to express anger.

Secondly I believe that if the government does eventually send in the army then it will only escalate the situation into further violence, as all it takes is one shot to be fired at the rioters and all hell breaks loose. I do not have the answer to resolve the situation, but sending armed troops against your own people, history has shown is not a wise move.

So for the foreseeable future it is no doubt a wise move by Apple to clear their inventory from sight at the end of business, as I’m sure many other shops will take to doing to reduce the likelihood of having their goods stolen. 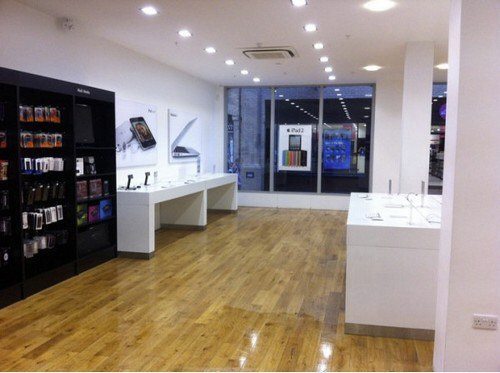