Now here’s a rather interesting thing, it appears there is a YouTube video that is attracting rather a lot of interest, the reason for this is the title of the video is “iPhone 5 Website Leaked,” and said footage has currently had 78,512 hits, however all is not as one would seem.

The iPhone 5 Website Leaked video comes our way courtesy of the guys over at Ubergizmo and they say that this video is a fake due to some “rather glaring errors,” the footage was originally uploaded by iPhone5Website.

As to those glaring errors in the footage, the guys say that the video shows what is purported to be the next generation iPhone with a bigger display although at 960 x 640 resolution, which they say doesn’t make any sense, and there are no service bars shown in the left corner, while there is also a typing error “GrÃ¶sserer Display.”

Furthermore there are numerous other typo errors in the video footage, and of course if Apple did have an iPhone 5 website up and ready then surely they wouldn’t place a hidden secret link to it on their site.

Curious about this video I watched it a couple of time and decided to check it out for myself by hitting up the German URL shown in the footage, and did the same thing the person did, clicked on the iPhone page and scrolled down to where that hidden link was supposed to be, and guess what, it isn’t there, feel free to try it out yourself.

So it does appear that this video of the supposed iPhone 5 website is indeed a fake, now just why anyone would want to fake such a thing is beyond me, I guess it does give them some short lived fame, but who wants to be famous as being a faker?

Anyway you can check out this purported iPhone 5 website video by heading on down and mashing the play button, but remember when it comes to anything Apple basically no one finds out anything for sure until Apple is good and ready. 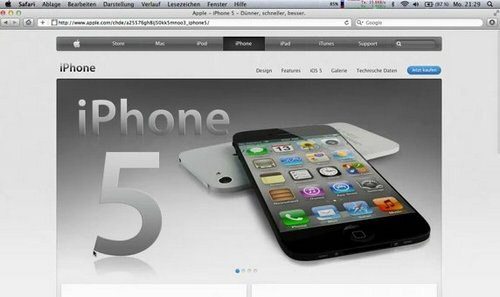