Remember way back when, and the iPhone 4 prototype scandal that rocked the Internet, the one where an Apple employee left the aforementioned new iOS smartphone in a bar and subsequently found its way into the hands of Gizmodo who splashed all the details over the net waves and Apple was somewhat annoyed their beloved secret tech had been outed and thus brought charges of theft.

Well according to an article over on 9to5 Mac, the San Mateo District Attorney has dropped all charges against Gizmodo and any of its employees, basically clearing them of any wrongdoing in getting hold of the iPhone 4 and reporting what they discovered.

However, the two guys who apparently “found” the iPhone 4 prototype and passed the device over to Gizmodo’s Jason Chen aren’t so lucky and have been charged with “misappropriation of lost property.”

Here’s what the District Attorney’s office had to say in a statement…” The San Mateo County District Attorney’s Office has filed misdemeanor charges against two individuals for the misappropriation of an iPhone 4 prototype that was lost by an Apple employee and subsequently recovered in a Redwood City establishment by the defendants on March 25, 2010. Brian Hogan, 22, of Redwood City was charged with one count of misappropriation of lost property, and Sage Wallower, 28, of Emeryville, was charged with misappropriation of lost property, and possession of stolen property. Their arraignment is scheduled for Thursday, August 25, 2011 at 9:00 in Redwood City. After a consideration of all of the evidence, it was determined that no charges would be filed against employees of Gizmodo.”

Obviously the Gizmodo guys are pleased with the outcome and say, “We are pleased that the District Attorney of San Mateo County, Steven Wagstaffe, has decided, upon review of all of the evidence, that no crime was committed by the Gizmodo team in relation to its reporting on the iPhone 4 prototype last year. While we have always believed that we were acting fully within the law, it has inevitably been stressful for the editor concerned, Jason Chen, and we are glad that we can finally put this matter behind us”

So there you have it, finally Apple loses a battle, and one that challenged the basis of tech reporting, apparently Apple hasn’t commented on the decision, but it would be interesting to here what they have to say about the decision don’t you think, but then perhaps they are too embroiled in numerous lawsuits against Android devices at the moment. 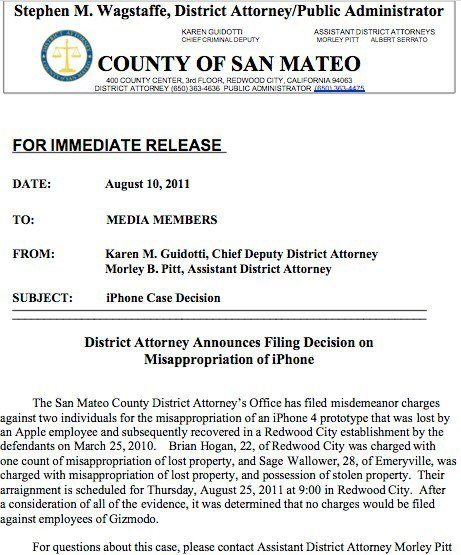