According to the guys over at Android Police, those wishing to pick up the Motorola Photon 4G will probably benefit form hitting up RadioShack as the guys have now chopped the asking price of the Photon 4G in half.

This means you can now gobble up the Motorola Photon 4G for a very nice low price of just $99.99, although apparently the option for that low price is for new accounts only, so if you are an upgrader then you shouldn’t bother.

Of course it goes without saying but I will say it anyway, to take advantage of the RadioShack $99.99 Photon 4G price you will be required to sign your life away to the usual 2-year agreement with Sprint, but you do get free shipping as well via Fedex.

Apparently this new $99.99 price for the Android smartphone could well be the lowest around as Wirefly and Amazon still have the Motorola Photon 4G up for sale at $179.99.

So there you go, it seems like right now would be the best time for anyone wanting the Motorola Photon 4G to go grab it from RadioShack, and of course if you are after the Photon 4G and do take advantage of the offer feel free to let us know by dropping us a comment below. 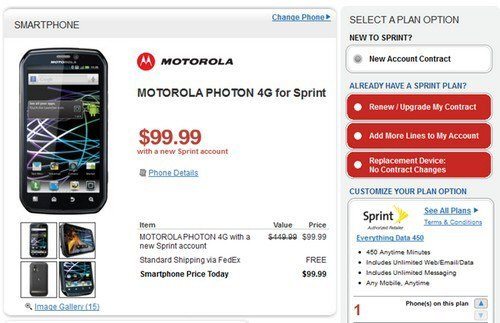