Well now here we have a little speculation for the iOS faithful to chew over, as most rumours have claimed, Apple is looking not only to deliver the iPhone 5 but also a cheaper version of the iPhone presumably to address the onslaught of Android, and the latest rumour on that lower priced iPhone is that the device could come out to play as the iCloud iPhone.

According to an article over on Applenapps, they have been chatting to not one, not two but three unnamed “independent sources” who are apparently “connected to Apple in different ways” and the upshot of what these sources are saying is that Apple intends to launch two iPhone models, the iPhone 5 and a cheaper version called the iCloud iPhone.

Apparently this new iCloud iPhone will feature less internal storage and depend heavily on Apple’s iCloud and will apparently be for the iOS handset user that will want to heavily rely on iCloud storage rather than handset storage.

Now for a bit of speculation on price of this iCloud iPhone, apparently the word is Apple is looking at a price tag of $400 rather than the $600 it would cost for the iPhone 5; however, taking into consideration carrier subsidies, the article states the iCloud iPhone would become a free smartphone when signing up for a two-year agreement with the carrier.

To get the cost of this iCloud iPhone down apparently the device will retain much of the internals of the iPhone 4, parts that are already in their supply chain and have come down in price, although the design of the iCloud iPhone will be slightly different to the current iPhone 4.

Apparently the iPhone 5 and the iCloud iPhone are the main reasons Apple held off launch and has waited until September with launch windows for both handsets apparently set for the last week of that month.

Of course this all remains firmly in the realms of rumour as even thought this news is supposed to come from 3 independent source with contact with Apple,. It doesn’t come direct from the Apple chiefs themselves so it goes without saying take it all with a large pinch of salt. 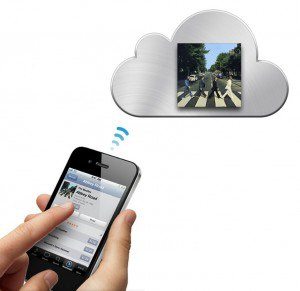