I guess the tech guys are always looking for new technology to see if it can be put to use in the mobile space, and it appears that the latest piece of tech being considered for use in smartphones is airbag technology, as Jeff Bezos, the CEO of Amazon has now filed a patent for such tech to cushion your mobile device should you drop it.

According to an article over on Geekwire, the Amazon chief’s protection solution was recently made public by the USPTO listing the Amazon chief along with vice president Greg Hart as co-inventors of “a system and method for protecting devices from impact damage.”

Apparently said new protection solution will have a “safety monitoring system” that utilised a handset’s gyroscope, radar, infrared, camera, or other sensors that would sense distance from objects, motion, orientation and take just a split second to calculate if the device is at risk of impact damage.

Apparently the guys have come up with a few systems for protecting your mobile phone, the first is that use of tiny airbags that would deploy to limit the shock of impact, instantly inflating via minute embedded cartridges of carbon dioxide, and apparently can deploy multiple airbags or determine which side the device will impact on and deploy the airbag to the required area.

Another system is apparently uses a system of springs, which would take the place of the airbag deployment and basically absorb any impact shock, while another idea uses the expulsion of gasses to make sure the device is flipped over mid-air to land on said tiny airbag.

Lastly and probably the most crazy of the protection solutions is the device would again feature gas cartridges that would fire off gas in order to “cause a gentle or safe landing” of a device, (hmmm Star Trek thrusters system perhaps?

Obviously whether or not any of these smartphone or other device protection systems becomes a reality at some point in the future is up for debate, and to be quite honest personally I somehow have a hard time envisioning a mobile phone suddenly deploying tiny airbags big enough to stop the device from being damaged.

Still it does at least show that some in the mobile area are looking at new ways to protect mobile devices from the results of fumbling hands of users, albeit no matter how far-fetched they would appear. Sp what do our readers think about these ideas, or do you have another idea that could help save your device from impact? An attached bungee cord perhaps? 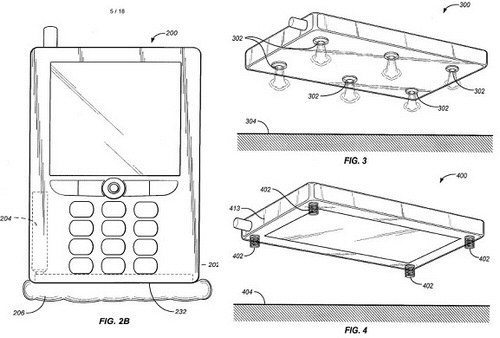