Although BlackBerry maker Research In Motion has been having somewhat of a rough time in the mobile space lately with many saying RIM’s rule is just about coming to an end, the smartphone’s home turf Canada has now seen fit to honour the company with the production of a postage stamp.

Actually BlackBerry isn’t the only thing being honoured with a Canadian postage stamp as there are numerous several inventions gaining the same innovations honour according to an article over on BlackberryOS.

Along with the BlackBerry smartphone, three other devices gain the same honour, the electric oven invented by Thomas Ahearn in 1892, the electric wheelchair invented by George J. Klein, and the pacemaker invented by Dr. John Hopps in 1950, all Canadians of course, and the set of four stamps will be available to purchase from the Canada Post as of the 17th of this month.

As for the BlackBerry, well here’s what the Canada Post says, “While smart phones and other communications devices, as well as technologies such as push email and mobile apps, are commonplace now, they were nearly the stuff of science fiction in 1999, when Research in Motion (RIM) founders Mike Lazaridis and Jim Balsillie introduced the now iconic BlackBerryÂ®. Their invention freed information workers from their desks and changed the way the world communicates. Subsequent versions and continuous innovation have kept RIM and its BlackBerry device a front runner in the massive smart phone market.”

Karen Henricks the senior designer at q30 Inc says, “Given that the innovations span such a long timeline – from the oven in 1892 to the modern BlackBerry – our design challenge was to find a way to visually link the four stamps. We chose consistent cropping and angles, as well as a palette of co-ordinated colour tints and type, to tie the stamps together as a series.”

For those that would like to have a piece of BlackBerry memorabilia to add to their collection a book of eight stamps, two of each design will cost you $4.72 while if you are a collector of first day covers, the innovations first day cover will set you back $3.36.

Well at least this is a little good news for BlackBerry as they haven’t really had a great deal of upbeat news for some time, although I doubt having a stamp made in honour of the device will turn the company’s fortunes around. 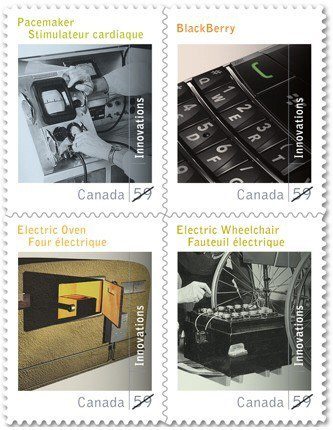