HTC Holiday Pictured: Could It Be Getting A Name Change?

Back in May a new Android smartphone surfaced known as the HTC Holiday and now it appears that the Android handset has had a few pictures taken albeit the device looks as if it has been through the wars a little, but looking at the pictures does bring up the possibility that perhaps the HTC Holiday is in line for a name change.

According to the guys over on Slash Gear, the fellows over at XDA-developers came up with the images that are presumed to be of the Holiday, although it appears the thread has now for some reason been deleted and the first thing to hit you right in the eyes is that the smartphone has either a back plate with CALIFORNIA on it or someone has slapped a sticker on it for some reason.

The guys suggest that the HTC Holiday could release with US region specific cases or someone simply stuck the sticker on the device for no apparent reason. However I would suggest the possibility of HTC taking a leaf out of the Orange book when it comes to device naming.

As you know Orange has the San Francisco, so possibly HTC has decided they might give the Holiday a name change and has come up with the idea of naming devices after US states, hence the HTC California, sounds plausible yes?

Anyway as it stands there’s not a great deal of detail when it comes to the HTC Holiday, but what we do learn from the images is the device will have a 4.5-inch qHD touch screen, a 1.2 GHz dual core processor, 1GB memory, and apparently an 8 megapixel rear facing camera along with a 1.3 megapixel front facing camera.

As you can see from the images the smartphone is most probably destined for AT&T as it has the MyAT&T app, and appears to have some kind of inductive charging port on its rear. I said the handset seems to have been through the wars as evidenced by smashed display.

Still no word on just when we are likely to see the HTC Holiday come out to play, but do you agree or disagree that the handset could be called the California, or do you thing that perhaps that “California” means something entirely different? 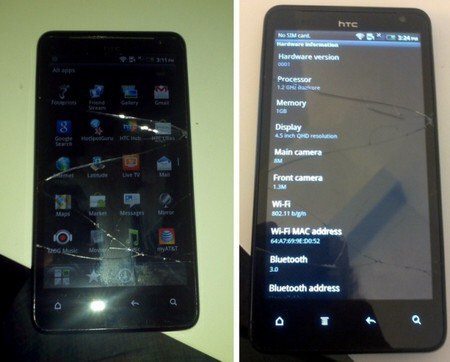