Although everyone and their aunt knows that Apple’s next generation iPhone will probably come out to play as the iPhone 5, there’s hasn’t been any confirmation that the next iOS smartphone will actually be known as the iPhone 5, that is up until recently when Orange France made a booby and made mention of “iPhone 5” in a recent job listing.

According to an article over on The Next Web, although Apple has banned their partners from referring to the Apple device by name, Orange France made a faux pas by referencing the iPhone 5 in a job listing that’s been live since the 11th of August.

However when checking out that job listing now, all evidence pertaining to the iPhone 5 has been removed. The job listing seeks an intern for the company’s mobile multimedia division to “implement and automate monitoring methods on the mobile Internet of its customers.”

Apparently the listing refers one terminal to be the “iPhone 5” the applicant would need to determine the impact said device would have on client Internet usage.

So basically meaning Orange France has called the iPhone 5 by what it believes the device will be known as, the iPhone 5.

No doubt Orange on realising their faux pas acted quickly to alter the job listing, whether that was at the demand of Apple or off their own back is unknown, and until Apple actually unveils the next generation iOS smartphone, which is expected to happen in September, just what the handset will actually be called is still just speculation.

Having said that, the general consensus is Apple will follow the iPhone 4 with the iPhone 5 for its high end market and possible call the expected less expensive iPhone the iPhone 4S although it has been rumoured that device could be known as the iCloud iPhone.

Anyway other than Orange putting their foot in it by referring to the device as the iPhone 5, most are fairly confident the handset will appears touting that handle, of course we could all be quite wrong in our assumptions. 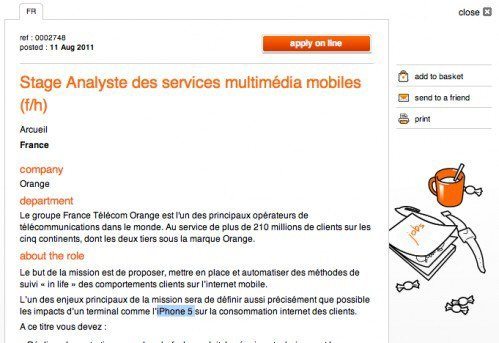