iPhone 5 Parts In Black And While Pop Up

Well lets face it anything to do with the iPhone 5 is sure to attract attention as we move closer to the expected release date for the next generation iPhone, and it is news on a couple of spare parts for the iPhone 5 that have now surfaced on the net that shows we can expect the iPhone 5 to appear in both black and while models.

It’s the headphone jack replacement parts that are of more interest here because they come in both black and white, which suggests that Apple is looking to deliver the iPhone 5 in both hues, although that may not happen on initial release.

As for that replacement iPhone 5 camera lens there isn’t a great deal that can be gleaned from the part and no other details where offered.

Other than the fact that the iPhone 5 jacks will be available in white and black just like they are on the iPhone 4, there’s nothing else to be said about these parts other than they are from differing Chinese resellers.

So it does appear that even if not right away, at some point the iPhone 5 will be available I white otherwise why have white coloured replacement parts right?

So here’s a question for our iOS faithful readership, if Apple does release the iPhone 5 in only black initially whenever that may happen, will you eagerly snap up the iOS smartphone or would you wait to grab a white iPhone 5 if a released at a later time?

Feel free to let us know whether you will purchase the iPhone 5 on release no matter what colour it is or whether you will be holding out for the white model by dropping us a line in our comments area below. 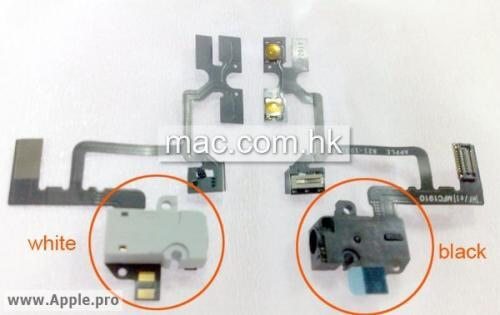