Phones Review Quickie: Those that have been patiently awaiting the arrival of the 3D glasses free experience offered by the LG Thrill 4G on AT&T have been faced with delay after delay with the smartphone, which was originally scheduled for an early August release, however apparently the LG Thrill 4G won’t me making an appeared on AT&T now until September as once gain the device sees delay.

According to an article over on the Android Community, by way of Android Central, the guys have got hold of a leaked doc that states the LG Thrill 4G has been delayed until Sunday the 4th of September.

Apparently there’s no word on just why the Android 2.2 Froyo smartphone has been delayed even further, but it appears that if you are one of the AT&T faithful waiting on said device, then your still have a few more weeks wait ahead, that is of course if the handset isn’t delayed yet again as the 4th of September approaches.

However according to the guys, the possible reason for the delay to the LG Thrill 4G is that AT&T has apparently decided to give the LG Thrill 4G a name change and will in future be known as the LG Thrill 3D, presumably to get across that the device sports 3D glasses free technology.

Apparently the leaked doc is to do with RadioShack, who have now halted pre-orders for the LG Thrill 4G due to this delay development.

Are any of our readers still holding out for the AT&T LG Thrill 4G/LG Thrill 3D or has the continued delay with the device sent you looking elsewhere for an alternative? 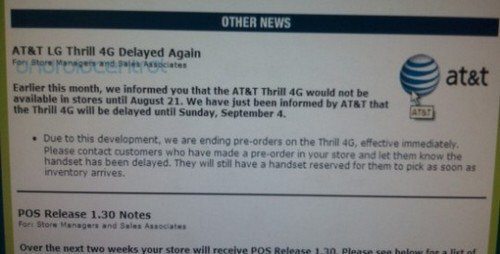