And the lawsuits keep on mounting up against Apple, with the latest lawsuits filed against the company claim that Apple stores in Beijing, China have been accused of selling refurbished iPhone 4 handsets as new devices, and a Chinese consumer rights advocate has now filed two lawsuits against Apple.

According to an article over on Apple Insider, the Global Times reports that earlier this week, Wang Hai, apparently well known for a fifteen year crusade against fake products in China has delivered indictments against Apple citing China’s “Consumer Protection Act.”

Apparently 6 customers that brought an iPhone 4 from authorised dealers or an Apple Store in Beijing claim that the registered warranties are under the 1-year term as Apple promise, and thus these cut down warranties has caused allegations that Apple has sold customers refurbished or returned iOS smartphones.

Apparently on the 9th of July at the Xidan Joy City Apple Store in Beijing, 2 customers purchased an iPhone 4 and on reaching home the customers accessed the Apple website to register their handset and found that the deadlines for the devices were listed as January and April of 2012, meaning the standard 1-year warranty was actually 3 to 6 months less.

According to the report Apple Store staff offered new iPhone handsets hoping to resolve the problem, however one customer stated that staff tried to extend the warranty date and thus “tried to trick her.”

The China Consumer Association has been watching the case while the plaintiffs in the case are asking for compensation of double what they originally paid for the iPhone 4 along with legal costs and an apology.

An Chinese Apple Store workers says, “It’s impossible that we sold refurbished cellphones,” but declined to add any other comment while Apple’s Chinese PR hasn’t yet commented.

Wang says, “It’s cheating to sell refurbished products as new ones. It’ll be discrimination against Chinese consumers if the case turns out to be true as refurbished cellphones are also sold in other countries, but at a cheaper price.”

So there you have it the latest piece of lawsuit scandal hitting Apple, although with the cash Apple has it would be quite easy to end this particular dispute by paying up to the plaintiffs as I’m sure it wouldn’t cost that much. 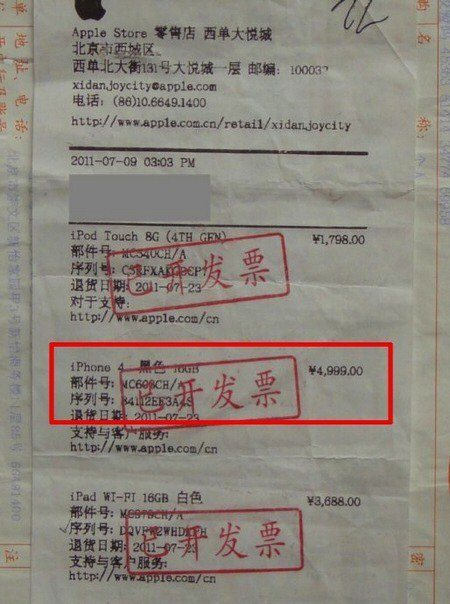