The iPhone 5 is still a mystery, especially when it comes to the design, features and exact release dates, but a new iPhone 5 screenshot found online brings more questions to the table.

The screen shots shown below suggests that the iPhone 5 by Apple are being produced over at Wintek and judging by the photo the smartphone apparently being released October 7 with pre-orders starting end of September could mean it will feature a gesture home button and a larger touch screen.

Thanks to 9To5Mac by way of Weibo the screenshots points towards Winteck producing the Apple iPhone 5 smartphones, of course this is the case of “Is it real or fake?”

The photo below is a little blurry so cannot see a great deal of detail, so cannot really tell if this is the iPhone 5 or not. The sources suggest an elongated homescreen button that could possibly feature a gesture-based system. 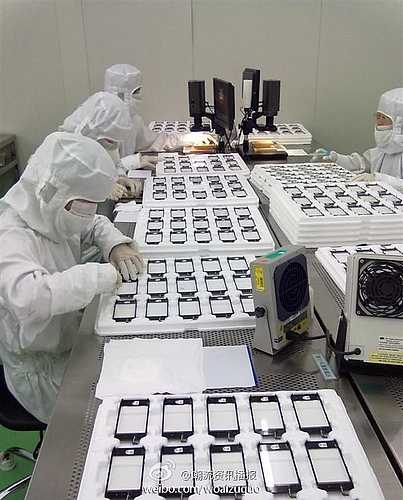 The screen size looks a little wider than the Apple iPhone 4, we all know that the iOS 5 is due for public release soon and to add a new iPhone 5 with this new operating system on board is heading in the right direction for the release date mentioned above.

The photo above shows workers cleaning the touchscreens or they could be simply be giving them a quality control check, the workers have gloves, masks, overalls and a full head gear.

This photo could indeed be any smartphone, there is no clear detail to suggest it is the Apple iPhone 5 due to release soon, but would be nice to think so.

Are these the real iPhone 5 smartphones? We would love for you to post your comments in the commenting area provided below, what do you think fake or real? We all know that there will be many more rumours, photo leaks, feature and specification rumours and leaks until the official announcement.