For all you HTC Sensation 4G handset users on the T-Mobile network that have been waiting the arrival of the Android 2.3.4 Gingerbread update to hit your device, you may just like to know that old T-Mobile began rolling out the update to devices over the air as of yesterday the 18th August.

According to an article over on Tmonews, it will take a bit of time for all HTC Sensation 4G users to receive the Android Gingerbread update over the air but it is expected all users should have received the Android OS update by “late September,” says T-Mobile support.

Of course HTC Sensation 4G user can always keep checking to see if the update is there by hitting up “About Phone” >”HTC software updates”>touch “check,” and follow the on screen prompts, and although this doesn’t guarantee you’ll receive the update immediately, it’s always a good thing to check just in case.

So there you have it, as of right now some HTC Sensation 4G users should be playing nice on Android 2.3.4 Gingerbread although some will have to continue to wait for a while longer until roll out is completed, but at least you now know it will be coming to your Android smartphone in the not too distant future, are you now overjoyed? 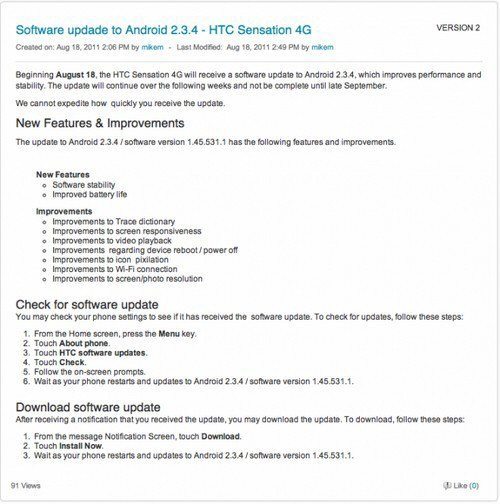 One thought on “Android 2.3.4 Gingerbread Rolling Out To HTC Sensation 4G”