iPhone Isnâ€™t The Only Thing Apple That Gets Knocked Off

As most know anything to do with Apple is big business and the Chinese have no scruples when it comes to knocking off Apple gear, and it appears that the knock off merchants don’t just target such Apple related gear as the iPhone 5, Apple iPad or even Apple Stores, as word is the knockoff guys have now ripped off the Steve Jobs bio.

The officially Steve Jobs biography is planned for release later in the year, however according to an article over on Ubergizmo by way of MicGadgets, Taiwan has now knocked off the iPhone guru’s biography.

Apparently the fake Steve Jobs book was launched back in April and is available for purchase in Taiwan for a very reasonable price of 8 bucks, and is rated one of the top five selling books in Taiwan bookstore KingStone.

Since going on sale the knockoff has sold in excess of 4000 copies dragging in over one million Taiwanese dollars, which is roughly US$39,000, thus the fake manuscript looks to be doing fairly well.

Apparently some writer called John Cage translated the manuscript, and although this is in no way the real deal official Steve Jobs biography, apparently the three top stores offering the rip off have stated that the publisher has shown then proof of authenticity, so basically mean they believe the book is authorised and will not be halting sales anytime soon.

However, apparently the Taiwan Consumer Protection Commission is taking a look into the matter to ascertain whether the publisher is telling the truth or is telling a porky or two, which could get them into deep doo-doo if the CPC finds out the book isn’t authorised.

Word is a Taiwanese reporter tried to contact the writer of the book but funnily enough the writer’s contact number and registered address seems to be incorrect, which isn’t that surprising really is it.

Just goes to show the knock off merchants will rip off just about anything to do with Apple that can turn them a buck. 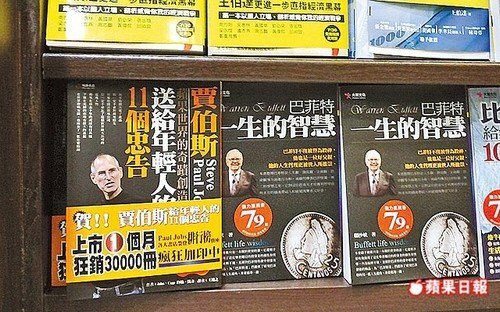