As you more than likely know, Apple and Samsung are going at it head to head in a fight over Apple claiming that old Sammy copied the design and feel of the iPhone and Apple iPad with Samsung Galaxy devices and want to ban Sammy from selling said devices across the globe.

And the guys over at Razorianfly have come up with an image as to why they think Samsung will probably lose the battle with Apple, the image can be seen below, and says, “Does anything else really need to be said?”

Well yes actually there is more to be said, because if Apple is successful in banning all Samsung Galaxy gear such as the Samsung Galaxy Tab 10.1 and Samsung Galaxy S II amongst others, where will it end? Will Apple then go after other mobile phone makers whose products resemble Apple gear?

We all know that Apple wants to get rid of their biggest rival in the mobile space, Android and it seems to me that Apple is targeting Android devices, but no matter how much Apple would like that to happen, Android is here to stay.

In the image below is shown old Samsung phones and tablets, and the new Samsung smartphone and tablet against the iPhone and Apple iPad, but so what, every manufacturer needs to move with the times and make better and classier products otherwise be left behind in the mobile space, something we have all seen with Nokia and LG.

Does Samsung Gear copy Apple gear? Probably, but then not exactly, as there are of course visual differences. When it comes to tablets well I’d say that most tablets look like each other anyway otherwise they wouldn’t be a tablet would they, but then that’s just my personal view.

And as it stands my personal view is if Apple is successful in getting Samsung Galaxy products banned across the globe, Apple wont stop there and in the end it will be customer choice that suffers the most.

What do our readers think of this fight, should Apple be allowed to win and force Samsung to stop offering their Galaxy devices, or do you come down on Apple side and think customer choice should be strangled all in the name of design? 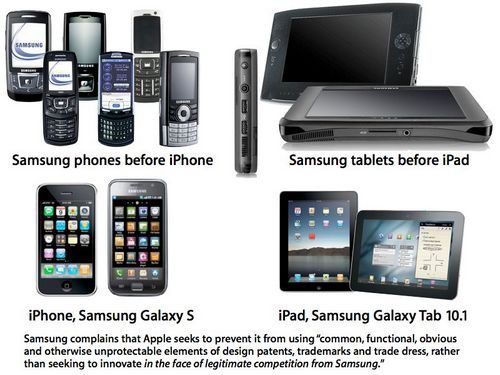