As the whole mobile world knows by now HP in their infinite wisdom has killed off the first webOS tablet, the HP TouchPad and will also be moving away from webOS on mobile devices, although the latest bit of scuttlebutt is Android Gingerbread may come to play on the TouchPad as I reported earlier.

However what we have for your viewing pleasure below is a hilarious take on the demise of webOS and the HP TouchPad when word reaches the Fuhrer, and old Adolph throws a fit.

The video called Hitler learns HP is abandoning webOS comes our way courtesy of the guys over at Gizmodo and by way of YouTube user Herplederples and delivers almost four minutes of Adolph ranting on about the TouchPad and its rivals.

I have to give a word of warning here, the video footage does include some profane language in written format as subtitles so if you are offended by this in any way then please do not view the footage.

I have to say I do find this type of video rather funny and couldn’t help giggling as I watched, and the look on the actors faces when Hitler says, “It’s OK the TouchPad will catch up eventually,” is classic.

When Hitler is informed of the demise of the HP TouchPad, after the inevitable awkward silence, he demands those who own and Apple iPad and Android tablet to leave and virtually the whole room empties.

Those that don’t like bad language are safe up to this point, after which Adolph’s first words are “Those F***ing Pussies!” and then commences Adolph’s tirade including calling HP “Those Ba****ds.”

When suggesting the Fuhrer still has a Windows tablet, he responds “Those F***ing styluses, no one can use that s**t!”

A classic line for me is “I can’t play that Angry Birds s**t forever!” I’m not too sure what the Fuhrer would think about Android coming to the HP TouchPad though.

Anyway I’ll leave it right there and let you head on down to mash that play button and check our the Fuhrer busting a gut over the demise of the HP TouchPad, and feel fee to let us know if you enjoyed this hilarious video by posting to our comments area below…enjoy. 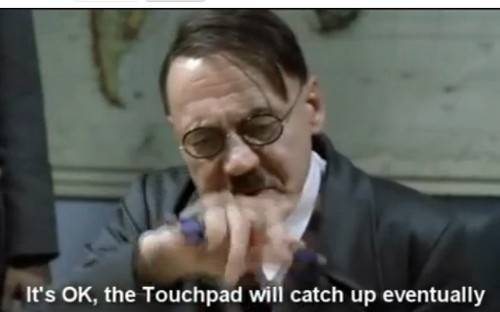